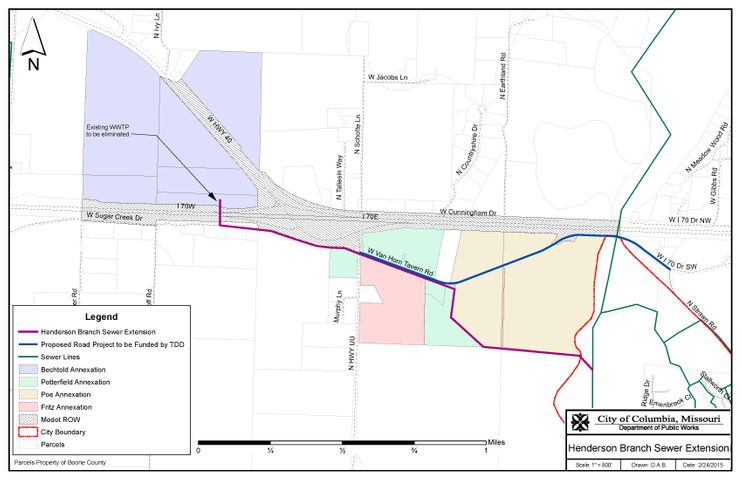 COLUMBIA - The Columbia city council voted 4-3 Tuesday night to reject a sewer extension that would have connected west of current city limits.

The extension would have connected the Midway exit along interstate 70 to Columbia. As part of the deal, the city would annex various Midway properties and extend the city limits to include the properties.

Larry Potterfield, owner of Midway USA, a hunting and outdoor product retailer, has been a major proponent of the sewer extension. He currently employs around 400 people and said this decision will limit the company's growth.

"Every sewage plant has a capacity," Potterfield said. "As the business grows and as you go 24/7 and fill up the parking lots, you're going to reach the capacity on your system sooner than later and we think that's about another 200 people."

Following the vote, Potterfield, who lives outside of Columbia, expressed an interest in running for Mayor when Brian Treece's term is up next year.

"The Potterfield family is doing great things for the community," Potterfield said. "We're doing our part, the family is, to contribute to this community and now we've got a mayor and some members of the city council that really frankly, I guess wish we weren't here. I don't have any way I could vote for the mayor because I don't live in Columbia so what I'm thinking about doing is establishing residents in Columbia, Missouri and getting in the next mayor race."

Joe Bechtold, owner of Midway Properties LLC., believed the extension and annexation of properties would have brought an increase in revenue to Columbia.

"Bringing sewer to midway is a great deal for both the companies that are going to get the sewer but also for the city. It's actually a 15.5 percent return on investment because of the taxes," he said.

However, Ward 3 council member Karl Skala was concerned about the amount of money the city is footing.

"Certainly there will not be a tax contribution until this sewer project is completed," Skala said. "Growth does not pay for itself when it comes to some of these annexations particularly the further you get away from the center of the city."

Voters passed a bond measure in 2013 to fund the extension but the estimated construction price has since risen from $2.6 million to $4.3 million.

In May, the council failed to pass a similar measure that would allow for construction to begin. The vote was 3-3 with council member Clyde Ruffin being the lone absentee. Ruffin voted against the sewer extension Tuesday.

Skala is looking to the businesses to help cover the difference between initial cost estimates and current estimates.

Bechtold, on the other hand, said he believes the city is better equipped to handle sewage than the businesses.

"I believe the city can do a better job of taking care of the sewage that we generate than I can. I would prefer to be a better steward of the environment. That's number one," Bechtold said.

Bechtold also said it was important to him for his business to be a part of the city.

After the vote, Potterfield said he believed this may be the end of the line for the Henderson Branch project.

As for a potential mayoral run, Wednesday Potterfield said it is a legitimate possibility.

"It's not fair to say I've made a decision but I think that if I decide to run that I'll win and I think if I do that it will be a wonderful, wonderful thing for the Central Missouri community and for the city of Columbia."