City encourages a different way to take care of your lawn 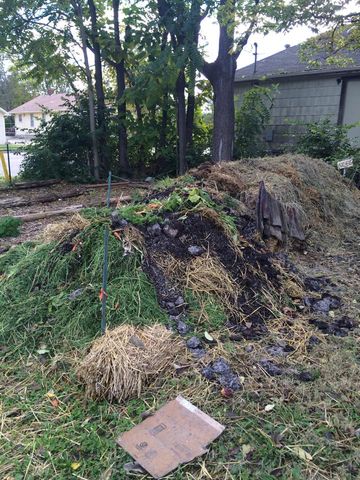 COLUMBIA - About 20 people filled a room in city hall to learn how and why they should switch to a more cost efficient and environmentally friendly way of caring for their laws and gardens.

Composting is a way to take advantage of nature's natural decay cycle to create an organic soil compound similar to fertilizer.

Compost educator Steve Callis teaches composting workshops for the city so he can show people how easy it is to make their own composting piles.

He said people can use grass clippings, old leaves, and kitchen scraps on a compost pile, and the natural decay process can happen at a faster pace.

"Everything organic decomposes and that's nature's way of recycling," Callis said. "In composting all we're trying to do is optimize that to speed up the process."

He said people can also compost to "provide the organic matter to put back into the soil that we keep taking out with gardens and landscaping."

Additionally, saving extra kitchen scraps such as coffee ground, eggs, or bread prevents them from being sent to a landfill.

The Environmental Protection Agency cites landfills as the third-largest source of human related methane emissions in the United States.

The decomposition of food in the landfills creates the methane, a greenhouse gas that is 20 times more potent and harmful than carbon dioxide.

Callis said the decomposition of waste at the landfill happens without air, while composting promotes aerobic decomposition and provides bacteria and microbes with enough air to produce less harmful chemicals.

"That promotes the optimum environment for the aerobic bacteria that do the decomposition," he said. "Those bacteria don't generate methane, so the byproducts of a backyard compost pile are heat and carbon dioxide, which is probably less detrimental to the environment."

Waste Minimization Supervisor Layli Terrill said she thinks since composting is natural, it is better for the soil, even if it doesn't kill off weeds.

"It won't kill stuff but it enhances the soil to minimize things like weeds then you don't have to worry about the pollution you get from fertilizer," she said.

She said regular fertilizer is treated with chemicals that run off into the water supply and could contaminate it.

Callis said the city provides these workshops and a composting site to help people learn how to become more environmentally friendly.

Steve Riesenberg works for the Columbia Center for Urban Agriculture.

It composes all its organic waste and picks up scraps from local restaurants and businesses in the area. Once its ready, the center uses it as a soil amendment on their food garden. He said he thinks composting is also a good way for consumers to save money.

"One of the best ways it would save a homeowner money is using compost as a soil amendment on your lawn," he said. "It needs less water and less inputs that you would have to buy."

The city will have its next composting workshop on November 8th.