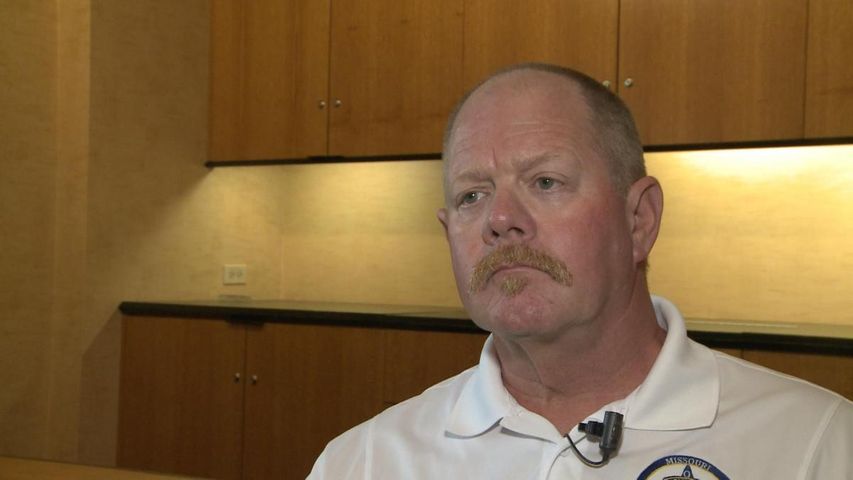 COLUMBIA - City Manager Mike Matthes said he asked the board of the Columbia Police Officer Association (CPOA) to fire its director Dale Roberts after his controversial Facebook post.

On the one year anniversary of Michael Brown's death by former police officer Darren Wilson, the CPOA posted an image that defended the actions of the officer. The post referred to the day as "Darren Wilson Day."

The post prompted a public protest outside of the Columbia Police Department Monday afternoon. City leaders and community members held hands outside the station in silence.

Hours after Roberts made the post, Matthes called the CPOA board members to city hall for an emergency discussion and urged them to fire Roberts.

Roberts said, as a trade union, the CPOA does not answer to Columbia city officials. He also said the board members of the CPOA told him they support him completely and will not ask him to leave.

However, Matthes said he was not satisfied with the board members' response. He wrote an email to the city council and police department saying, until Roberts is fired, he will not ask voters for more money to hire additional police officers.

"We need to understand each other, and that takes a lot of work," McDavid said. "And these insensitive posts hurt that process."

McDavid said the Facebook post damaged the public's trust in its police officers. He said Columbia already has a very low civilian satisfaction rate with its police, and he wants to improve relations between the community and the police department.

Matthes said he wants Roberts removed because he is tarnishing the Columbia Police Department's reputation.

"We have a fantastic police department, and they are the butt of most jokes because of Dale's behavior," Matthes said. "Our officers are getting ridiculously bad advice, and certainly an embarrassing representation."

Roberts said Matthes is a being a "bully," and that Matthes' actions will hurt the entire city.

"He has said to one of the unions, if you don't fire your leader, then I will punish the community," Roberts said. "I just don't know how you explain that."

Matthes said he will not change the police departments yearly budget in any way. He said he is just going to stop lobbying for any additional funding raises.

Roberts said Matthes has held a grudge against the CPOA for years, and his actions this week show contempt for the association.

"It appears to me, and this is just my opinion, he's unaccustomed to having people who don't let him have his way," Roberts said.

Roberts said he will not resign from his position.

"I don't think that's a solution," Roberts said. "When you give in to a bully, you just consider the bully to use that kind of behavior."

As a former judge, Roberts said he took issue with Matthes' disregard for city ordinances.

"City ordinance 19-39 prohibits city employees from actively engaging in any political protest or demonstration or cause," Roberts said. "How is it the city manager, the assistant city manager, the person that handles city relations, the chief of police and maybe some others, can go out in front of the police station and engage in this demonstration in clear violation of the law?"

However, Matthes said Roberts is mistaken, and public officials have the right to protest just like every other citizen.

At this moment in time, it appears that neither side has any intention of giving in.