City to decide how to use donated 47-acre land 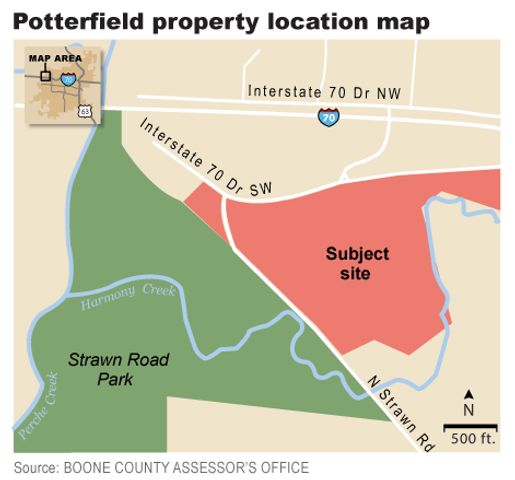 COLUMBIA- At Monday’s meeting, the Columbia City Council will discuss how to proceed with the development of land donated to the city.

The land, located on Strawn Road, was donated to the city in March by Larry Potterfield, CEO of ammunitions Midway USA.

Possible plans include a new facility for the Central-Missouri Humane Society or a new fire station. The community relations director for Columbia, Steve Sapp, said the city has yet to decide for certain what the land will be used for.

“This is just a report,” Sapp said. “This is not any type of official action that moved anything forward.”

Different options will be presented to the council on Monday to hear its opinion.

“Council direction is looking at multiple uses for the properties main side,” Sapp said. “One side is potentially for a fire station and another part of the land could be sold off.”

Joe Ritter is the president of the humane society board and said this would be a great opportunity to expand.

“We haven’t gotten any indication in either direction but are hoping we could use the land,” Ritter said. “

The humane society would build a second facility like the one they have now, which would give them the space to bring in more animals.

“We think this new facility would help us better serve the community,” Ritter said. “We will hope for the best and see what the council decides to do.”

Assistant fire chief, Brad Frazier, said that the city could use a new fire station but has no received any indication from the city that it is going to happen.

"As our community continues to grow, calls for service continue to grow as well," Frazier said." "The fire station has not seen an increase in staffing since 2009, so what that means is we need an increased response team."

Frazier said that adding the additional station would help to bring that response time down.

"We have identified a need in the North and West sections on Columbia, Frazier said. "Calls go up when there is an increased population so this station would help."

The council may provide staff direction with what they want to do with the land from here.