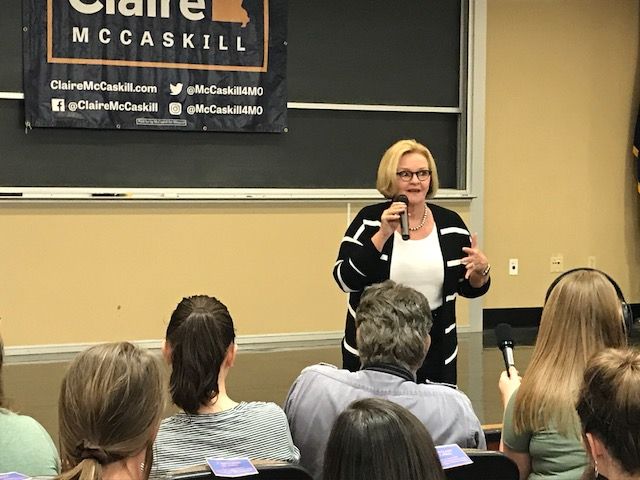 COLUMBIA -- Senator Claire McCaskill stopped at the University of Missouri campus Tuesday as a part of her Your Vote Counts campus tour.

Sen. McCaskill was greeted with protestors outside of Memorial Union yelling "fire Claire".

Inside she addressed students and some community members on issues including the student loan crisis, health insurance coverage and the cost of prescription drugs.

Everett said it was important for Senator McCaskill to be visible to MU students.

"She explains her message and platform better than anyone else can," Everett said.

During the visit, McCaskill encouraged students to volunteer in campaigns to learn more about the political process. McCaskill currently has 750 volunteers between the ages of 18-25 out of 8,000. Among the students that attended McCaskill's tour stop, one was Ben Ridder --a registered Republican voter.

Ridder found out about the visit an hour before it started from his political science professor. The professor only told students that there was a U.S. Senate candidate visiting today and not which candidate it was.

"No matter who it was I knew I wanted to go, I've always been interested in politics," Ridder said.

Ridder was one of the few students selected to ask Senator McCaskill a question. Ridder informed her on how he typically votes and asked her how she would persuade voters who vote Republican.

"I have voted for President's Trump's policies 45 percent of the time." McCaskill said.

McCaskill stated that the only way to get things done in Washington is to be bipartisan.