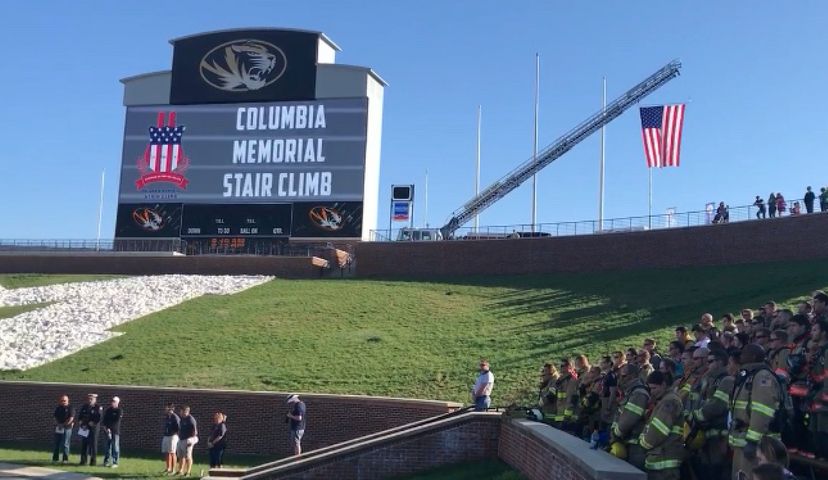 COLUMBIA – The home of Missouri Tiger football at Faurot Field was used for a different reason on Saturday. Instead of on the field, the action was in the stands.

The Columbia Memorial Stair Climb hosted the second consecutive event of its kind at the 91-year-old stadium. First responders from local stations and many from across the country came to climb Faurot’s stairs.

The participants climbed 110 flights of stairs to honor those fallen on Sept. 11, 2001. Many firefighters, policemen and E.M.S. climbed each step with full gear just like those that did 17-years-ago.

“It’s a way for us to always remember the fallen, the 343 firefighters, the 70 police and 90 EMS that were killed that day,” the event director of the stair climb, Tommy Goran said.

Goran said Faurot is the only SEC stadium that hosts an event like this. He said the stadium allows more space than the high rise buildings where stair climbs are most often held.

“Cheering each other on, pushing each other going up the stairs, you know it’s not the easiest thing to do to your body,” fireman John Mills said. “That comradery that feeling, knowing the next guy is right behind you pushing you on is pretty amazing."

Mills is a fireman from New York City Fire Department, ladder 25. He's one of the founders for the New York climb, and has traveled the world to participate and support the meaning behind these events.

“I’ve done a number of these stair climbs over the years, New Zealand to Australia, Columbia to Dallas, Kansas City to New Orleans. It’s absolutely amazing all these climbs that have popped up out of remembrance,” he said.

Mills a New York City native. He said he remembers that September day vividly. Then a college student, he said he recalls everything changing very quickly.

“I was just going to school and I was listening to the radio and all the sudden everything got really serious. I tried to get in touch with my family but there was no communication,” Mills said. “It made me feel even more alone.”

His father, Charles Mills Jr. was a police officer in New York City. Mills Jr. was in the World Trade Center’s South Tower on that Tuesday morning.

“My mother was at work in the hospital, she had talked to my father and he told her he knew it was a terrorist attack and that they were evacuating the building,” Mills said.

“That was the last we heard from my father.”

“For days afterwards I just thought my dad was walking out, and it didn’t really sink in until I went down there. It was horrific. That’s when it sank in that dad wasn’t coming home,” Mills said.

Events like these hold a special place in Mills’ heart. He climbs for his father. Seventeen years ago, Charles Mills Jr. climbed for a reason too. He climbed for his son, his family and a chance to rescue those still in the South Tower.

“My father was a police officer and he always said he would have went the fire route if he could do it over again,” Mills said. “Maybe I’m just following in his footsteps a different way.”

Participants of the climb at Faurot wore name tags around their necks while they ascended the steps. Each name tag featured a name of one of the first responders who died in 9/11 or a local responder who recently passed away.

When they completed the 110 flight trek, they announced the names around their neck on a PA system and rang a bell to honor their service and life.

For Mills and so many others, stair climbs offer a chance to remember the fallen of Sept. 11.

“That’s what is really and truly the amazing part, people that run these events aren’t from New York City, didn’t know one of the 343,” Mills said. “They just realize the importance to remember that day.”

“Never forget. That’s the best way we can honor the fallen from that day,” Goran said.

The money raised at the event will be donated to SafetyNet of Missouri and the Firefighter Cancer Support Network of Missouri.