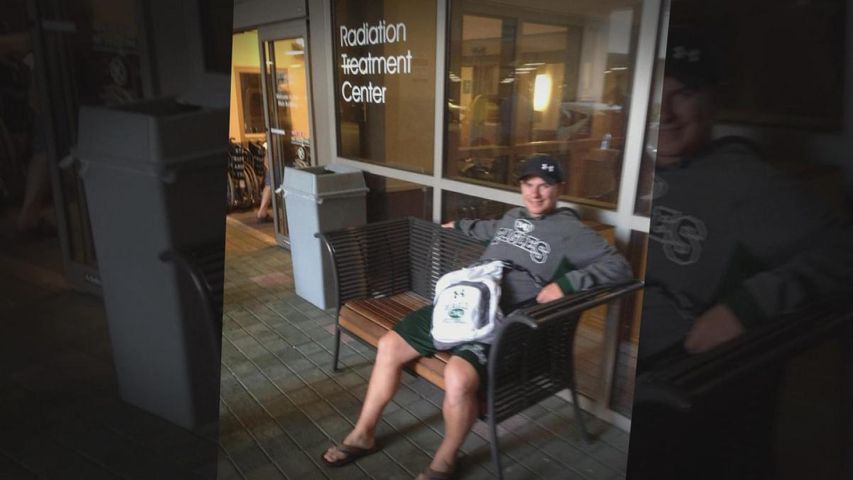 FAYETTE - In fall 2013, Central Methodist University (CMU) football coach Jody Ford was not coaching on the sidelines because he was fighting a different type of opponent - cancer. Before the season started, Ford was diagnosed with a rare form of stage three rectal cancer. But this coming football season, Ford and his team see a light at the end of the tunnel.

Ford has his fifth and final round of treatment late May, and in July he will have his last surgery in Houston, Texas. After two weeks of rehab following the surgery, Ford plans to be back on the sidelines to prepare his team for the season.

"You know they always said the end of it will be tougher," Ford said. "I mean it's definitely like a football season. I feel like it's week nine, my body is all beat up and everything, but you just got to keep going, just got to keep plugging through all the things that you are going through. And, it is hell at times but you just have to find ways to make hell fun."

Ford has turned the negatives of chemotherapy into positives with the help of his CMU football family.

"I've been mostly inspired by certainly my own players, my own kids, by my own coaching staff," Ford said. "They've really given me a reason to keep trucking, and they've been great I couldn't ask for a better group."

The seniors on the football team came together to take over some tasks that Ford could not complete while he was away for treatment. One senior in particular, Taylor Combs, made it a priority to keep in touch with Ford not just to make sure coach's shoes were being filled, but to keep a strong personal relationship.

"Every time we talked it wasn't about, you know maybe I'd ask him how he was doing, but we talked football, we talked life," Combs said. "It wasn't, never once was it, you know I'm in pain or this sucks. It was, he was so happy to talk and just made me realize how lucky we are and how lucky I am to have that man in my life."

Even though Ford was not physically present to coach his players this past season, he affected players with his positive attitude.

"I don't care what life throws at me," Combs said. "There's no reason you can't beat it, and you should do it with a smile on your face because everything is tough in life and that was a thing that he stressed so much was, there is nothing that can break you. And playing five years into him, if you didn't break then you're ready for anything because at times you thought that life was over and this was hell. But, to see his smile and face at the end of the day, he loved to break us, he loved to try and I'm glad to say that he never did and he never came close. But, it was a great experience and I will take that with me forever and I will pass it on to every person that I come in contact with."

Coaching on the sidelines, or coaching by phone, his players saw no change in his demeanor.

"He would have his phone on speaker in meetings and he would be watching film with us, and if we did something wrong you still got chewed out," Combs said. "It didn't matter if he was in Texas or if he's sitting there in the classroom with you. You always heard it, but he was always there to tell you how proud he was and he would criticize you but he'll tell you what you needed to do right and how to fix it so there wasn't a bit of change in him."

Associate head coach Miguel Paredes saw a change in character with Ford when he came back into town.

"Before you know he was more understanding with certain things but this time around he came back more like life's too short, you can't do all of the little things, you know, always remain positive," Paredes said. "I think that's what he brought back from his experience."

Ford's experience with cancer also had an affect on his team. The coaching staff saw a change for the better in the guys making plays on the field.

"There's no it's impossible you know, nothings impossible until you try and actually find out and you know I think the mindset of everybody has changed for that," Paredes said. "It's just a new attitude, everything's different now."

"It's going to be good to see him on the sidelines, jumping up and down, being his normal self," Paredes said.

Ford knows he's down to one final treatment but said he knows his battle might not be over.

"I have a high risk for this thing to come back," Ford said. "This isn't over by any means, it won't be over for forever, and all I can tell you is that there isn't anything that's going to break me. I'm going to keep smiling till the day they put my ashes in the creek by my parent's farm. And, that's the way it's going to go and that's the way I'm going to live my life and regardless of whether this thing comes back again or something negative happens, you know like I said I'm not going to take anything for granted and I'm going to love raising my children and enjoy my wife and my family and my coaches and my players. And, I plan on being here a long time, but if that day comes where I'm not, I won't have any regrets."