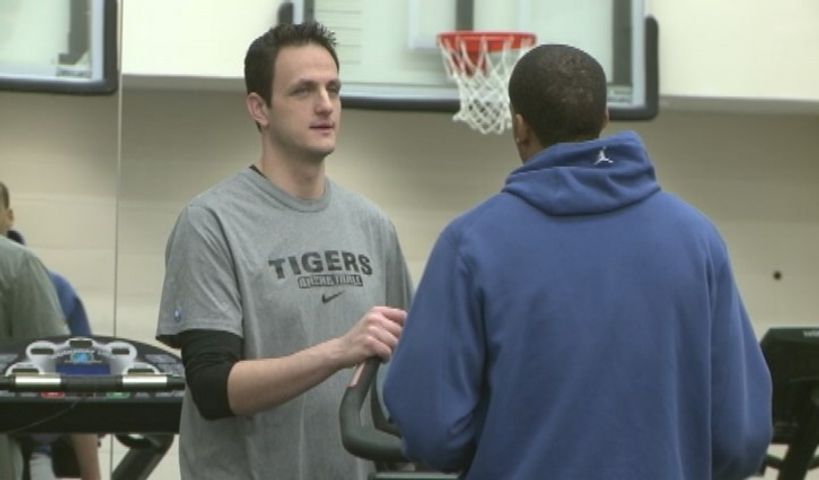 COLUMBIA -- Missouri Tiger fans saw a dramatic differnce on the floor last year. Frank Haith and his staff switched to a four guard line-up and had great success - picking up 30 wins.

The Mizzou staff also helped transform the personal appearance and well-being of the players - with big help to Director of Basketball Athletic Performance: Todor Pandov. Tiger fans were able to see the biggest difference in Missouri forward Steve Moore.

"Steve is a great example for our athletes because Steve totally bought into everything we were doing," Pandov said. "We took the job in April and we had a couple of weeks with the guys before they started their summer break...well in those couple of week Steve figured out 'hey, this is good for me.'"

This year a pair Mizzou forwards are following the same trend.

Alex Oriakhi said, "When I first got here I was definitely out of shape, I weighed the most I've ever weighed in my life so coming in with him my main focus was conditioning. We would do the regular conditioning and I would come in after...I was doing two/three sessions of conditioning which I feel is something I needed."

Senior Alex Oriakhi and Freshman Ryan Rosburg are shedding the extra body fat and gaining valuable speed instead. Oriakhi has been able to shed 18 pounds and drop 5.7% body fat since coming to Mizzou while Rosburg has lost 14 pounds and 3.1% body fat.

"He really gets you ready because he's a basketball player. He's played professional basketball and he knows what he is talking about. All of our lifts are specific to game like situations," said Rosburg.

Besides getting the guys warmed up and ready for the game - Coach Pandov also helps keep them in check while on the bench.

Pandov said, "That's very exciting because we want our guys to be very enthusiastic and help getting our guys going that are on the floor and also when someone makes a great play we can't have anyone running off on the court and so it's a very fun job for me and a very fun job for the guys."

When asked who cheers louder on the bench Coach Pandov or Laurence Bowers, Alex Oriakhi said, "I've gotta give that one to Coach Pandov cause he's a vet at cheering so I'm definitely going to give it to Coach Pandov but L-Bo's up there too."