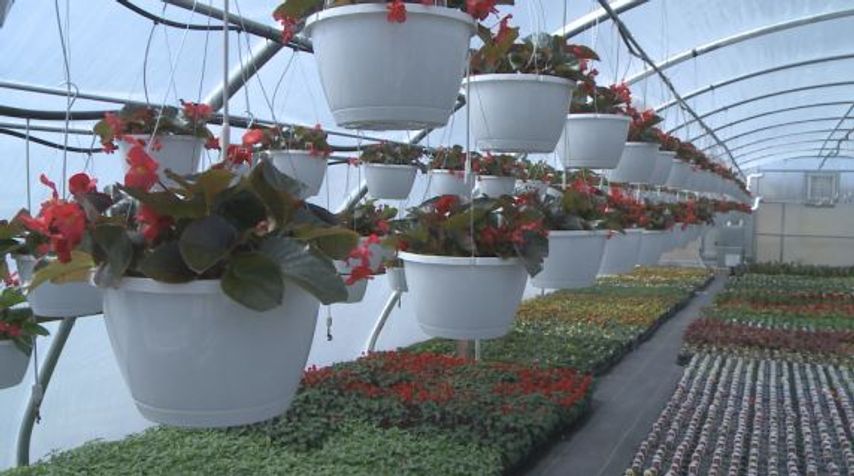 MOBERLY - The winter-like weather has plagued the midwest, causing nursery owners to close up shop at a time they would usually be springing open for business.

"We start in about mid-March and go into the Halloween season," Tyler Ritter, a manager of Ritters, LLC said.

Ritter said they've lost out on about three weeks of business at their retail location and going on two weeks of wholesale business.

"As a grower, artificial heat sources such as propane, can not produce the same quality of plant as natural heat produced by the sun and warm nights." Mark Ritter, a manager for Ritters said.

But this year, the late winter weather has made it a little different for the business. "Generally we open the store the third week of March, that's when the weather, the last couple of years, that's when we've been getting going," Tyler Ritter said.

The father-son duo of Tyler and Mark know snow and April typically don't go together.

"With a business that relies on spring sales as the majority of its income, it can be difficult to rebound from lost early sales," Mark Ritter said.

"We opened the third week of March, but we've closed quite a few days here and there with the weather, if it's below about 40 degrees, 45 degrees we're closing." Ritter said. "So we haven't even had a full week open at our retail and we haven't even started our wholesale, which again generally starts in that third or fourth week of March as well."

Ritters, a garden center, owns 14 greenhouses and a fruits and vegetables storefront in Moberly, Missouri.

Tyler Ritter posted on its Facebook Page April 6, "Due to the dropping temperatures and the cold weekend ahead of us we will be closing at noon on Friday and will open back up on Monday the 9th! The warm weather is coming... we just have a few cold ones left! Stay warm this weekend!"

Ritter said the dropping temperatures forced them to close during a usually busy weekend.

But that wasn't the only time they've had to close this spring.

Ritter also posted on their Facebook page on April 2, "CLOSED TODAY AND TOMORROW (April 2 & 3) Due to weather, we will be closed at our retail location on Morley. Additionally, the rest of this week our hours will be abbreviated to 9-5."

Ritter said the late start on the season has affected the business. "Our biggest problem is space, we have about 14 greenhouses but we get shipments in every three or four weeks throughout the end of April," Ritter said.

According to Ritter, it can be a tetris game to fit the hundreds of thousands of flowers in the greenhouse.