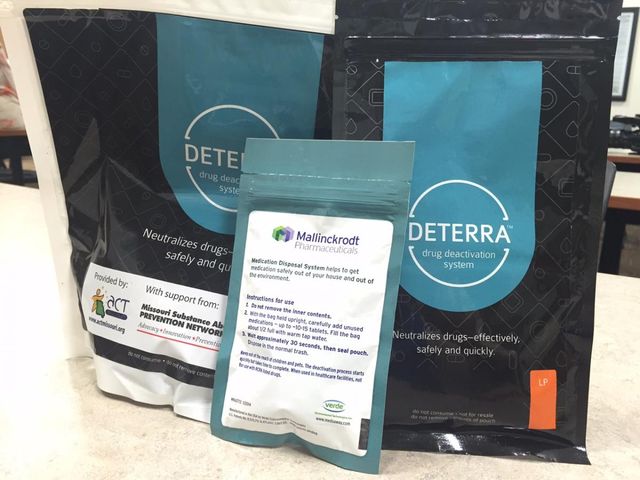 JEFFERSON CITY - Cole County Sheriff's Department is considering a new way to get rid of old or unwanted prescription drugs.

Jefferson City and Columbia were among the cities that had to end their old method of incinerating disposed prescription drugs when the Department of Natural Resources determined it was not environmentally friendly.

But Cole County Sheriff's Department thinks it has a solution to that issue.

In a press conference Thursday, the department introduced the Deterra Drug Deactivation System. As demonstrated in this story from KOMU 8's St. Louis affiliate, the system works by putting prescription pills in the bag then adding water, which dissolves the pills in an environmentally friendly way.

Sheriff Greg White said while he's excited to use the new system, getting rid of old or unwanted prescription drugs in the community is his first priority.

"Keeping unneeded prescription drugs is dangerous for kids, it's dangerous for pets, and frankly we don't need any elderly people making a mistake and taking an expired drug," White said. "Mistakes like that can easily result in death."

White is also concerned about people using prescription drugs recreationally and hopes that by implementing this new disposal system, he and other law enforcement officials will be able to prevent things like "pharm parties."

White describes "pharm parties" as events when kids bring their parents old prescription drugs to a party to share with their friends.

"What these kids don't know is not all drugs work how you expect," White said. "They take drugs like Valium thinking it will act like an amphetamine when that's not the case and when you mix it with alcohol it can kill you."

ACT Missouri is the organization proposing that a new state wide system for proposing drugs be put in place.

According to their website, Missouri is the only state that does not have a prescription drug monitoring program.

JCPD no longer has a place to dispose of prescription drugs

CPD says it can no longer dispose prescription medication