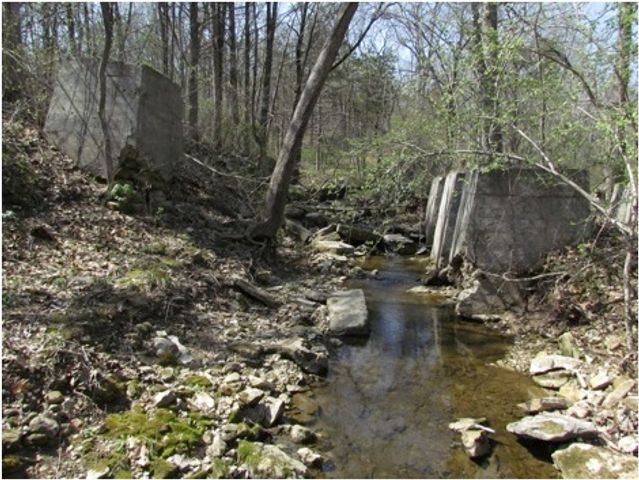 CALLAWAY COUNTY - A local man will find out Tuesday whether or not he will leave a new mark on mid-Missouri's map. Chuck Lahmeyer, 67, said he recently rediscovered a creek from his childhood that runs through Callaway County and part of Jefferson City and found it did not have a name.

In May, Lahmeyer made a proposal to the Missouri Board on Geographic Names that the creek be called Alton Creek. The board only meets twice a year and will meet Tuesday to decide whether or not it will officially adopt the name. The name comes from the old Chicago and Alton Railroad that crossed the creek via a large trestle bridge back in the 19th and early 20th century.  Trains stopped taking the Chicago and Alton railroad about 80 years ago. Today, only a few telltale signs remain, such as old stone footings from the bridge and pieces of rotting wood.

"When I learned that this big trestle went over a stream that had no name, I said ‘That ain't right," Lahmeyer recalled. "A stream that's that significant and required this huge bridge deserves a name."

Lahmeyer began preparing for his proposal to the board in February. The process required so much work that, he said at first, he was discouraged. He interviewed about ten families living near the creek to provide evidence no one called the creek a particular name.

"People say we played in a creek and we swam in it, but we just called it the creek," said Lawmeyer of the interviews. "It did not have a name. So, I'll take some pride in seeing it get the name and then being eternal, you might say."

Lahmeyer said the board members told him his PowerPoint presentation was the best they had ever seen. In it he included more than 100 pictures from a hike he had taken in the spring along the creek and the path on which the Chicago and Alton Railroad used to run.

Thus far, the proposal has faced no opposition, leading Lahmeyer to believe the board will officially approve the name when it meets Tuesday.  Officials from Holts Summit, Jefferson City and Callaway County have signed letters of endorsement for the name proposal.

Lahmeyer's family and friends have also been supportive of his proposal, including his 90-year-old mother.

"People tend to kind of like the idea," said Lahmeyer. "You know, names have been on the landscape for a hundred years, and the idea that you can add a name is kind of strange to most people."

"I didn't know you could do that," Lahmeyer's wife, Lois, added. "I didn't think that if there's a creek out there - first of all that it wouldn't have a name - and that you could go ahead and put one on it. But now I understand why - it should have a name!"

"We're losing our culture and our heritage quite quickly, and what he's doing is helping to preserve a little bit of that," said Johnson. "There are so many cultural resources in our state that we have failed to recognize in one way or another. "

So after about four months of work and five months of waiting, Lahmeyer must wait yet another day to find out if the board will officially accept the name of the creek he had originally seen while hiking through the woods with his father more than 55 years ago.

"I know he worked hard at it," Lois Lahmeyer said. "He was enjoying himself and I think it was a worthwhile endeavor. So he had a good time, and now we may have a creek with a new name."