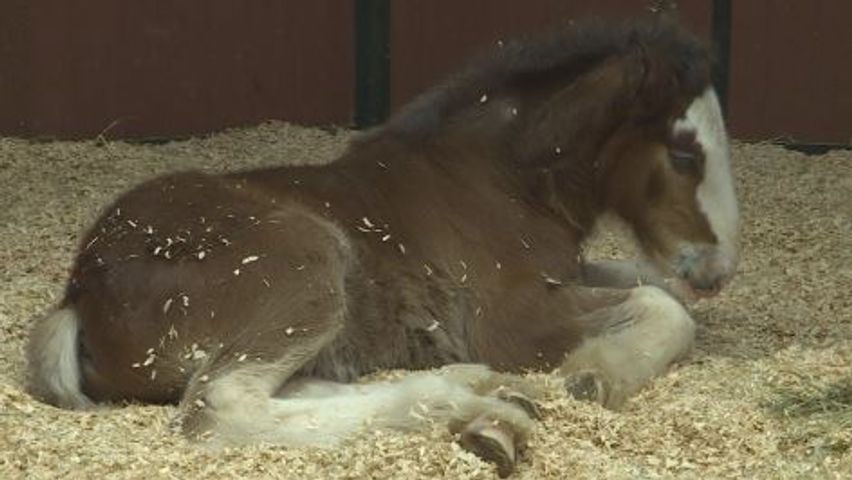 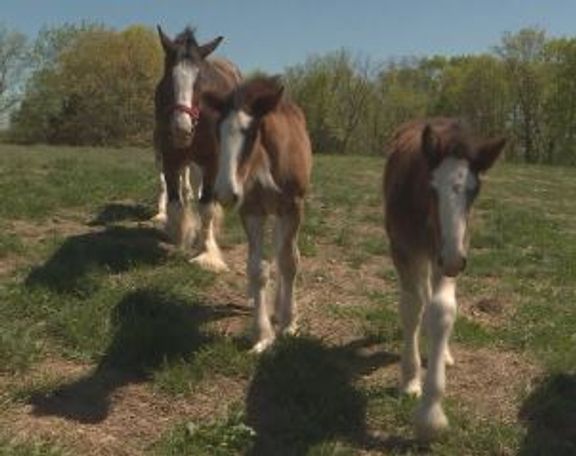 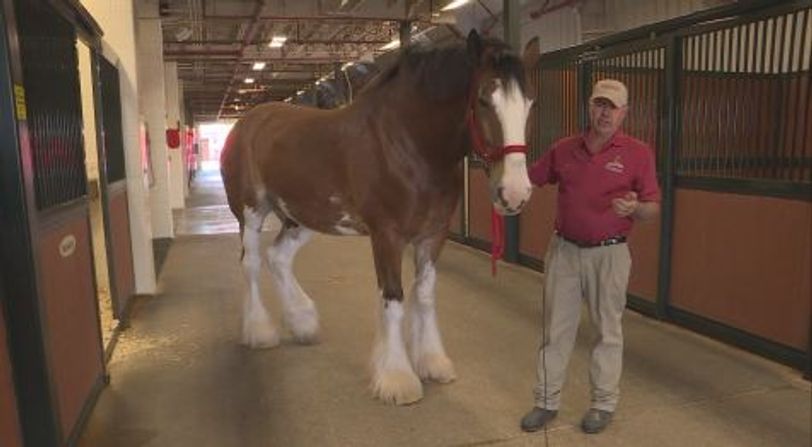 BOONVILLE – From the color, to the size, to the personality, everything is right about Jake.

“He’s what we try to raise. If all of my babies were like Jake I’d be thrilled,” John Soto said.

Mid-Missouri is home to the only Budweiser Clydesdale breeding farm in the world.

Warm Springs Ranch sits on more than 300 acres in Boonville and breeds geldings for the Budweiser hitch teams.

However, Jake still has a long way to go until he is ready for the team.

According to Soto, Jake will be weaned from his mom at 5 months and go to Grant’s Farm in St. Louis for a year and a half for hands-on work. When he is 3 years old he will go to Merrimack, New Hampshire, for harness and driving training with other horses. At the age of 4 he will officially be a Budweiser Clydesdale.

There will be 14 foals by September, and each one has a unique purpose. Soto, who has been with the company for nearly 37 years and has helped with at least 500 births, said the farm has many uses for the horses that are not on the hitch.

“You can use them for your commercial spots,” Soto said. “We do a lot of what we call one-horse shows where we just stand and hold a horse and people come up and pet them and take pictures with them.”

A 2013 Super Bowl commercial featuring a 3-day-old filly was the only one ever shot in part at Warm Springs.

Soto said the Budweiser Clydesdales’ legacy began in 1933 as a gift from August Busch, Jr. to his father to celebrate the repeal of Prohibition. The Clydesdales have since been sent out to promote Budweiser.

According to Soto, the hitches travel 300 days of the year and make more than 300 appearances a year.

In order to join the hitch team, the Clydesdales have to meet certain requirements.

“Our average Budweiser Clydesdale which would be about 18 hands, which is 6 foot at the shoulder, have the blaze face, the bay in color, the nice stocking feet with the feathers, which is what we call the fluffy hair on their legs, and then our average Clydesdale would weigh about 2,000 pounds,” Soto said.

Clydesdale handler Eric Reisinger said the Clydesdales put a smile on the face of people of all ages.

“Everybody knows Budweiser whether its from the local town parade or Super Bowl Sunday. They have all seen the Budweiser Clydesdales,” Reisinger said. “And just to have it here, everybody can relate, even if they are not Budweiser drinkers, the love the Clydesdales.”

“It would be like a proud dad to see Jake on the St. Louis hitch one day and you happen to be there and you go by and the guys that are driving him say, 'boy Jake, what a nice horse he is, what a driving son of a gun,' you know,” Soto said.

He said it all takes teamwork, but Warm Springs Ranch is the start.

“When you get doing something like this, how do you not do it,” Soto said. “This is a dream job that any horse person would love to do. I’m just very, very lucky to be where I am.”

Warm Springs Ranch will host its next big event on Aug. 21 for the solar eclipse. It will involve food, Budweiser samples and Clydesdale photo opportunities.