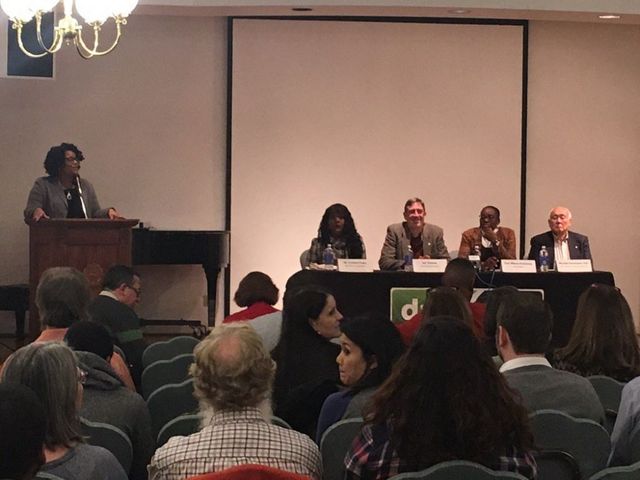 COLUMBIA - Stephens College hosted a forum Tuesday night to analyze racism in Columbia, and as one panel member put it, "things might get a little uncomfortable."

The Diversity Awareness Partnership included speakers from the University of Missouri, the Columbia City Council, and the group Race Matters.

The recent demonstrations on the University of Missouri's campus thrust the school into the national spotlight, when graduate student Jonathan Butler went on a hunger strike and the football team stood with him, refusing to practice until his strike was over.

"They have been soundly and roundly ignored" said Traci Wilson-Kleekamp when referring to the student protesters at MU last month. She said she would also be angry if she was trying to learn in a similar campus climate.

"Disney is one of the worst for creating stereotypes" said panelist Michael Hosokowa.  He said he is often referred to as "Mr. Miyagi," the karate master in "The Karate Kid". Hosokowa says that those types of stereotypes can erase a person's identity.

MU professor Cynthia Frisby said it's important to remember when discussing diversity that it isn't always "black versus white".

She said there are many different ways that people are diverse, but added that the media and the events it covers is part of the reason why people see a "black versus white" narrative in society.

One attendee said they believe the City of Columbia has racist hiring practices and wanted to know how it plans on changing that. Ward 4 Councilman Ian Thomas responded saying he didn't believe people were being implicitly racist in hiring practices, but said it is common for people to hire others they see as similar to themselves.

Wilson-Kleekamp said in order to have these changes be instituted, it "needs to go beyond paper."

She said City Manager Mike Matthes is the one who is responsible for holding the departments accountable for their hiring practices, and the city council should should ask him how he plans on instituting his social justice resolution.

Wilson-Kleekamp also emphasized the importance of creating a positive climate for minority employees so they will want to continue working there.