Columbia boy celebrates the 'superheroes' in search for Alzheimer's cure 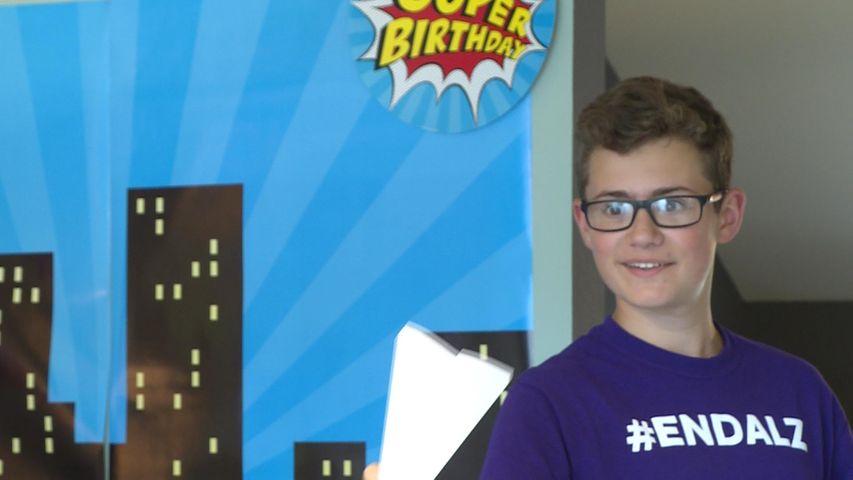 COLUMBIA - 13-year-old Alex Elletson has spent his past five birthdays raising money and awareness for the Alzheimer’s Association.

It all started with a class project in the third grade.

His mother, Robin Elletson, said, “He was eight years old when we was assigned this project, and he saw on the website that there was a party going on on June 21st.”

Each year, the Alzheimer’s Association hosts “The Longest Day,” a 16-hour event held on the summer solstice.

Lizzi Willett, a walk manager for the Alzheimer’s Association, said the event is a metaphor for the lives of those impacted by the disease.

“For caregivers who are working with somebody with Alzheimer’s or any other type of dementia, every day is the longest day,” she said.

Alex decided to make his birthday a day-long fundraiser. He was particularly inspired by his great grandfather, who was diagnosed with the disease.

Robin Elletson said Alex's great grandfather was an Air Force general who loved being around children and used to always ask math questions.

"That’s one of the reason why it was so devastating when he ended up being diagnosed with Alzheimer’s because having his cognitive abilities impaired really changed his personality,” she said.

When Alex saw his loved one suffering, he decided he wanted to make a change.

“It’s a really terrible thing that happens to a lot of great people like my great grandpa and it’s going to continue taking lives if we don’t do something about it,” he said.

Alex rang in his thirteenth birthday with a superhero theme. He and his fundraising team, the Blue Axle Ninjas, started at 5 a.m. playing homemade games, screening movies, and holding a special moment to remember those afflicted by Alzheimer’s.

Every year, Alex’s parents encourage him to set a realistic goal of $250. Alex has surpassed that each time and has raised more than $5,000 total.

The work doesn’t stop after the parties. Alex travelled to the state Capitol earlier this March on Memory Day.

Willett said, “It gives us a time to sit down with our policy and lawmakers and tell them a little bit about what’s going on us with us, what the status of the disease is, where we are with our facts and figures and just advocate for the policies and laws that we’re looking to put in place.”

Advocates like Alex speak with members of Congress every year. The House floor becomes filled with people wearing purple, the organization's official color.

This past state legislation session, appropriations for Department of Health and Senior Services included Alzheimer’s grant for respite which provides a modest financial assistance to help with the cost of support, products, equipment, safety services and legal guidance for individuals living with Alzheimer's.

When funds are available, qualifying caregivers in the Greater Missouri Chapter service area can receive the modest financial assistance by calling the 24/7 Helpline at 1-800-272-3900.

Willett said, “Alzheimer’s is not a red or a blue issue, it’s purple.”

Alex said he'll keep doing his part in the search for a cure. He wants children his age to understand more about Alzheimer’s.

“It’s really, really common in older people. One in three people get it actually. So there’s no way to even slow it down yet," he said.

According to the Alzheimer’s Association, a cure could be in sight.

The Columbia chapter recently spoke to a local Alzheimer's expert.

“He let us know that he believes that we’re within 10 years of finding something,” Willett said.