Columbia businesses near campus close due to threats 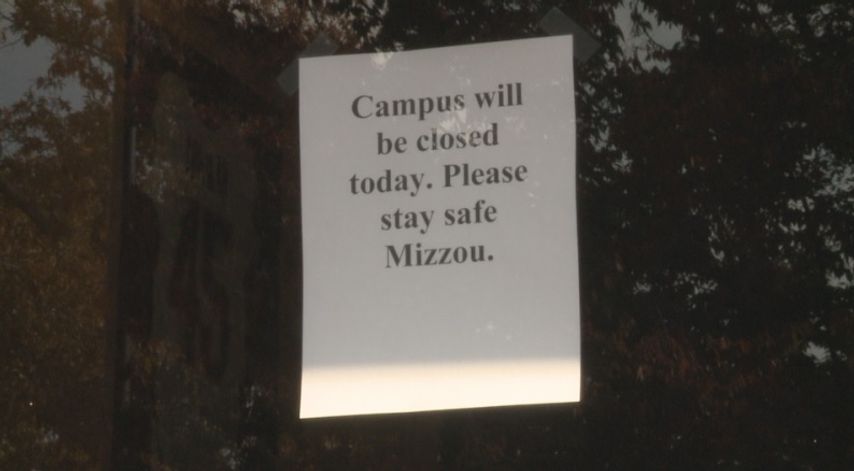 COLUMBIA – Two businesses in downtown Columbia closed their doors for the day on Wednesday after threats made on Yik Yak about the University of Missouri campus surfaced.

Campus Bar & Grill and Starbucks Coffee on 9th Street both left signs on their doors with nobody to be found inside them, saying that they would be closed for the day.

The sign on the doors of Campus Bar & Grill read: “Campus will be closed today. Please stay safe Mizzou.”

@KOMUnews Campus Bar & Grill on 9th Street is also closed today with this sign in the window. pic.twitter.com/JszzvdeJSZ

MU Campus Dining tweeted on Wednesday afternoon saying, “Due to staff shortages, some of our locations will be operating with limited services. We are doing our best, and appreciate your patience.”

MU Campus Dining Marketing Manager Michael Wuest said having a short staff has been something they have been battling all semester.

“If you’ve dined with us this semester, it isn’t hard to see that we have had problems with staffing.”

Wuest said he was not sure if the threats made to the campus were a reason why there would be staffing problems on Wednesday.

“It is really challenging to have student staff,” Wuest said. “I haven’t talked to the managers today.”

One manager of Ingredient Restaurant on 9th Street said he talked to his general manager Wednesday morning to find out if they were going to be open.

“He didn’t hear about the threats until this morning, so when I told him, we called our corporate owners, and they said that we should operate normally,” he said.

KOMU 8 News reached out to Campus Bar & Grill and Starbucks for comment, but have not yet heard back from either business.

The threats were a reason for some students not attending class on Wednesday. Police said the threats came from Hunter Park, a 19-year-old University of Missouri Science and Technology student. Park was arrested with a bond set at $4,500.