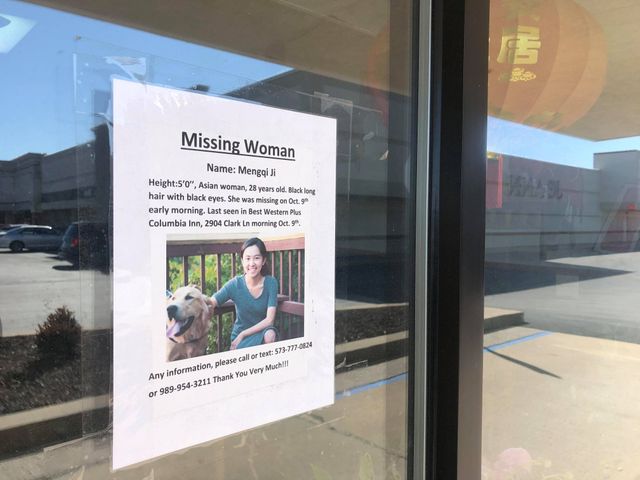 COLUMBIA – Four months after a Columbia woman, Mengqi Ji, went missing, many local businesses still have the flyers on their front windows and doors that encourage people to find her.

“We pray for Mengqi every day, before we come to the restaurant,” said Ashley Yang, owner of China Kitchen in Columbia.

To view the Mandarin version of this story, click the video below:

Yang said her family and restaurant only represent a small part of the community effort. After Mengqi went missing in October 2019, many Chinese customers would anonymously order food from China Kitchen and deliver them to Mengqi’s parents.

“They (Mengqi’s parents) live in Columbia,” Yang said. “And many Chinese want them to have some Chinese comfort food at home.”

Hong Kong Market is another place in town still hanging Mengqi’s photo and a missing notice. One employee told KOMU 8 Mengqi has been missing for too long and it is no longer the ideal searching period for a missing person. But they still want the flyer on the wall just to see if the miracle happens for Mengqi’s family.

Tzu-Yang Chao, owner of Bubble Cup Tea Zone, said his shop has also joined this fight. They recently took the flyer down, but he said they had the flyer on their check-out counter for a few months, and every customer would see it when they ordered drinks.