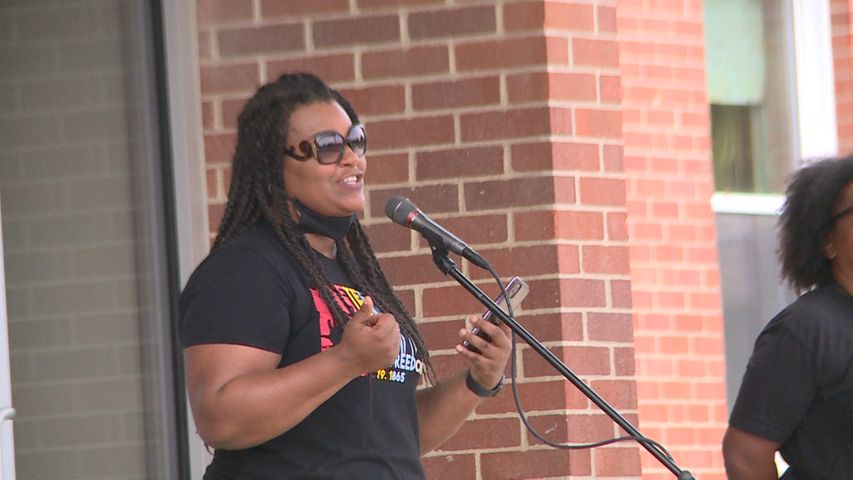 COLUMBIA — Hundreds of people gathered across several events in Columbia on Friday to celebrate Juneteenth, a holiday celebrating the end of slavery in the United States.

Organizers said the event is rooted in educating and celebrating black history. Ashley McCrady of Columbia said her family showed up on Friday to do just that.

"I realized I've been doing work with my daughter, but not nearly enough work," McCrady said. "This is the next step. This is showing her diversity and respecting cultures that maybe we don't identify as part of our own."

This is McCrady's first year celebrating Juneteenth, but she doesn't see it being the last.

"For me it's a huge learning moment," McCrady said. "What happens tomorrow? For me, I have the privilege to just keep learning — just keep reading, keep talking, keep having uncomfortable conversations and keep putting myself out there."

The CoMO Celebrates Juneteenth event was a hybrid of both in-person and online celebrations. From 11 a.m. to about 12:30 p.m., people of all ages gathered at Karnis Church to listen to music and speakers. Starting at 3 p.m., the celebration went virtual. Organizers lead a series of panels and videos about black history and the current state of inclusivity in the U.S.

Organizer Adonica Coleman said while the original plans for Como Celebrates Juneteenth couldn't be followed through after the COVID-19 pandemic, she's just as excited for this year's celebration.

"I really feel like we have a great opportunity with this event," Coleman said. "I'm just excited for the whole day."

Later in the afternoon, a group of black business owners gathered with the community at Douglass Park in celebration of the holiday.

“The importance for me being out here today is to recognize our ancestry and our heritage and the trials and tribulations we went through,” Lashunda Glasgow, a Columbia resident, said. “To support all of the black businesses, it’s really important.”

The festival included live music and performances along and about 20 tents set up showcasing black-owned businesses, such as restaurants, clothing stores and barber shops.

Jaque Cox, one of the organizers of the festival, said he and the others putting together the event wanted a way to bring people together.

“We wanted to make something big for the community, something bigger than before,” Cox said. “With everything going on in the world today, we felt like this was a great time to do something really big for the people.”

Because of the current national attention toward systemic racism in America, festival-goers said this year’s celebration means a little more than in the past.

“With all the police brutality and the racial injustices, it just makes it important to show us that we need to get together and be able to get along and just come as one so that we can get things done on a bigger level,” Glasgow said.