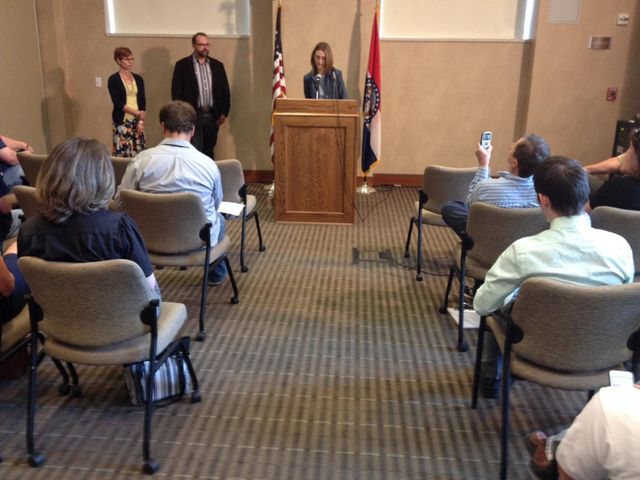 "Council has limited discretion in this matter," Chadwick said. "The petition will repeal the infrastructure funding but not stop a building permit from being issued to a development that conforms with the zoning regulations once the infrastructure plan is in place. I'm also very concerned about the city setting a precedent of walking away from asking developers who will put new stress and pressures in our infrastructure for support for that."

At the news conference, Chadwick said the ordinance being repealed won't stop the Opus development.

"The ordinance being repealed simply gives the city a half a million dollars to put toward that infrastructure and transit," Chadwick said. "By repealing the ordinance, we repeal giving the city the extra amount of money."

After Chadwick made her statement, she handed the floor over to Columbia Councilman Michael Trapp to answer questions.

"I wanted to make sure that I allowed other council individuals to be involved in the process, that it wasn't just me," Chadwick said.

This statement had some Columbia citizens in attendance upset.

"I wish that we could have a productive, collaborative conversation that takes into account what the community and citizens and constituents are seeing very clearly that they want for downtown," Greever-Rice said.

Greever-Rice said she has her own vision for downtown.

"We certainly want students adjacent to campus, but we also want families, we want seniors and retirees, we want people from across the spectrum," Greever-Rice said.

At this point, Chadwick said the Opus Development is a done deal regardless of the petitions, and the 256-bedroom complex will continue to be be built on Locust Street between Seventh and Eighth streets.

"We're essentially giving up a huge square city block for a generation or two or three to a use that is inconsistent with what downtowns are for," Greever-Rice said.