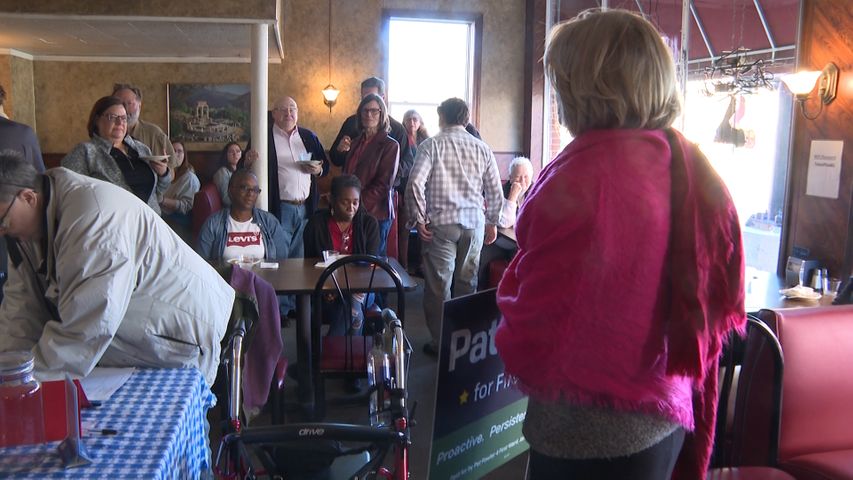 COLUMBIA — Three candidates are going head to head for the First Ward City Council seat as the April election approaches.

Pat Fowler kicked off her campaign with toasted ravioli and pizza Saturday at Tony’s Palace.

The event allowed the community to voice their opinions about the first ward and get to know the potential councilwoman. Fowler said she hosted this event to find more volunteers to help her campaign and set up campaign signs.

“It gives people an opportunity to come together and to laugh and to talk about fun things, as well as the hard work of being a campaign volunteer,” Fowler said.

“What Columbia needs is a strong first ward. It’s the very heart of town and it needs to be the heart,” Rogers said. “It needs to be a vital area. It is vital as it is, but it is not being supported.”

Fowler’s campaign focuses on increasing opportunities for prosperity for first ward neighborhoods and keeping infrastructure in good condition. She encouraged the community to register to vote.

“First ward, it’s about voting. It’s about registering to vote. It’s about making our voices heard. It’s about showing up in greater numbers than we ever have before,” she said.

With 33 days until the election, Fowler plans to go door-to-door and speak at the five remaining forums.

Mark Anderson, another candidate for the first ward city council seat, plans to kick off his campaign in the coming weeks. He hopes to create “one Columbia,” and tell people what his campaign is about.

“Just pushing it, pushing my Facebook page, knocking on doors, of course going to forums, but just me, just pushing, giving people information,” Anderson said. “Telling people who I am, this is what I can do, this is where I am at.”

The third candidate, Greg Pierson, is an University of Missouri student, is preparing his campaign and hopes to ensure that all community perspectives are heard.

“Our campaign is excited to continue engaging students and we hope that by increasing voter turnout, we will be able to impact real change on the most important issues in this community,” Pierson said in a statement to KOMU.

The election is on April 7.