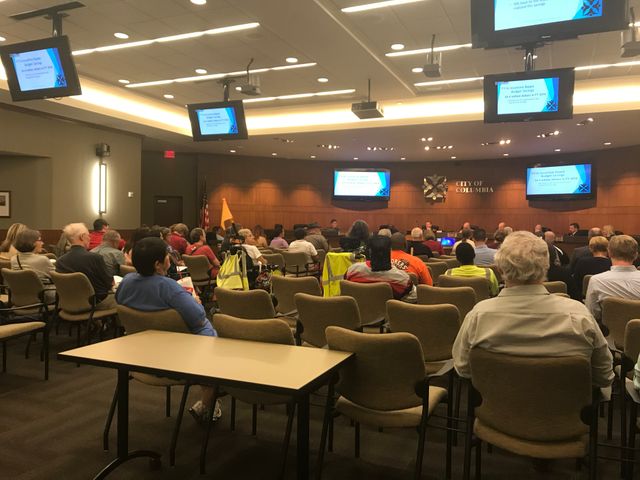 City Manager Mike Matthes submitted the budget to the city council in July.

“It’s no secret that we have a revenue problem,” Matthes said in his budget message.

"A continuous low sales tax, rising health care costs, a decrease in University of Missouri enrollment and increasing pension costs" are four challenges that Matthes said he sees for this coming fiscal year.

In his proposal, Matthes is recommending a net increase in staff of nine full-time equivalent positions..

Four department budgets are expected to see the most change: Health and environment, transportation, utility and public safety. However, only public safety is projected to see an increase in its budget.

Transportation departments are projected to decrease $4.6 million, or 9.6 percent from the 2017 fiscal year. This includes railroad, airport, parking and traffic control. To adjust for this decrease, the city is looking to increase the cost of transportation for some services.

Managing Partner of Strategist Communications Mark Farnen attended the meeting to discuss his thoughts on an imposed increase of the paratransit buses.

"While the fee increase might not seem great going from two to three dollars, that is a 50 percent increase. That's bigger than almost any other rate, fee or service increase that they are going to purpose tonight, 50 percent," Farnen said.

Health and environment departments, which include health and human services, community development and economic development, could see a decrease of $1.6 million.

Matthes proposed a decrease of $4.2 million in the utility department. Electricity could see the largest decrease with $5.3 million, followed by sewer with a $2 million decrease.

The public safety department had a $5.6 million increase for the fiscal year of 2018. This reflection is primarily due to the funding for the North Police Precinct/Municipal Service Center capital project.

The police budget showed an increase due to health insurance and pension increases while the fire budget is expected to see an increase because of pension costs.

To balance the general fund budget during the 2017 fiscal year, Matthes made a number of changes. One of these changes included postponing the replacement of vehicles and equipment, which saved the fund $1.1 million.

The city also waited 45 days to refill vacant employee positions. By doing so, the city saved one-twelfth of the total annual cost of these spots.

The council will hold additional public hearings on September 5 and September 18 to allow for public input. It will also hold a budget work session on Wednesday to discuss department revenues and expenses.

Final changes will be made by council before the final passage of the budget, scheduled for September 18.