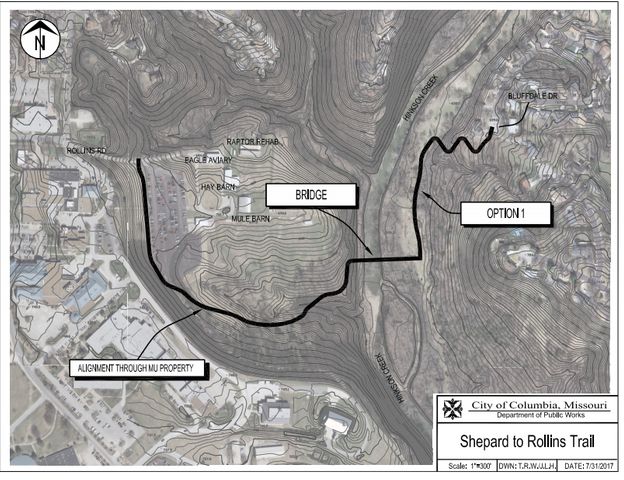 COLUMBIA - The Columbia City Council will vote Monday whether to move forward with the Shepard Boulevard to Rollins Road trail.

The trail has been a debate in the city council since 1995. Barbara Wren is a member of It's Our Wild Nature, a group that opposes the construction of the trail.

"I started fighting this back in 1995, because they wanted to use my backyard as a trail and probably my driveway," Wren said.

That began a 23-year battle in the city council of whether to build a trail near Bluff Dale Drive. The council has received multiple proposals for the project, all of which have been voted against.

Columbia Parks and Recreation Director Mike Griggs said the department has worked with the neighborhood over the years to try and improve the project. This has included moving where the trail would connect, removing sidewalks from the proposal and avoiding trees to conserve nature.

"We have tried everything to work with those neighbors, but when it comes down to it they just do not want it in their backyard, that's it," Griggs said.

It's Our Wild Nature says it is about more than just their backyards. The group said it opposes the trail for a variety of reasons such as wasteful tax spending, lack of ADA compliance and increased possibility for crime.

The project will cost roughly $2.3 million to complete. Wren said this cost is a complete waste of taxpayer funds. She said it is unnecessary to use funds to build the trail.

"It wastes federal highway transportation dollars and it wastes valuable park sales tax money," Wren said. "They say they need a new sports complex at the Fairgrounds but there's no money."

Griggs said he disagrees, saying the trail is clearly worth the money.

"Getting this project done is critical," Griggs said.

Griggs said right now there is a gap between two large stretches of currently existing trail. Without the Shepard to Rollins trail, he said there is not a safe way to get from one piece to the other. He said this needs to connect these pieces is what makes it so valuable.

"What's it worth to you to fill that gap," Griggs asked.

Filling the gap is not the only concern. The department also said it is important to fill it with a safe and ADA compliment alternative. Wren said this already exists.

"The Old 63 pedway gets you where you want to go and it gets you there in a more efficient manner," Wren said.

"That's absurd, you know that is not compliant, there is no other compliant route," Griggs said.

Griggs said the hills on connecting roads are irrelevant to the project. He said the roads are not ADA compliant, but what matters is what's constructed.

"From where we start the build to where we end the building on the trail, it will be flat it will be ADA compliant," Griggs said.

Wren and others on Bluff Dale Drive said they worry that if the trail is built, the connection to East Campus will invite crime into their neighborhoods. Wren said she fears criminals trying to use the trail as an escape, as well as college kids partying and disrupting the neighborhood with noise and trash.

Thomas lives in a home with a backyard adjacent to the MKT Trail, and said these concerns are nonsense.

"People shouldn't be fearful about that," Thomas said.

Thomas has lived in the same home for the past 20 years and said he could only recall two incidents in the entire 10 mile stretch of trail near his home.

According to Griggs the crime rate on trails is extremely low.

"I can recall on one hand the number of incidents in my 30 plus years with the Parks and Rec department on the trail system," Griggs said.

He said the concerns raised by opposition groups are not factual.

"I think those concerns are invalid," Griggs said. "It will be ADA compliant, the funding is critical, and I think that the benefit to all Columbians outweighs all that live there."

If approved Monday night, the council will move forward with trying to acquire the easements necessary for building the trail. If not, departments would either have to abandon the project or try to get the project approved again.