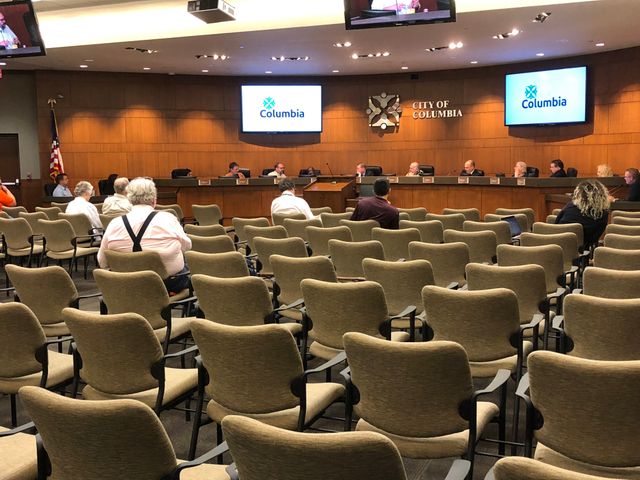 COLUMBIA – In a five to two vote, council members decided Monday night not to increase the property tax rate ceiling to the maximum amount the state law allows, 43 cents. It is currently at 41 cents.

According to a staff report, the higher property tax rate would have brought in about $470,000 to help build and operate a new fire station in southwest Columbia.

Based on the number of emergency calls the fire department received in 2017, that fire station could have reduced response time in 180 of those calls.

Council member Ian Thomas voted against the proposal because he said if passed, it would make it harder for the city to approve a higher property tax rate to fund better police and fire services in the future.

Council members Michael Trapp and Matt Pitzer were the only two who voted in favor of the proposed increase.

Pitzer said it was possible to increase the property tax rate ceiling without losing voters' trust in the work of the city administration.

"A lot of that lack of confidence, and one of the speakers mentioned it, comes from a belief that the city would have no follow through on what it says it's going to use the money for," he said. "If this were to advance, it's critical that this be used specifically to operate and staff those stations."

Trapp said he supported the increase in property tax rate as a way to balance the decline in revenue coming from sales tax.

"This is a progressive tax, and rarely do we get an opportunity to kind of rebalance the tax structure of the city that we inherited from decisions that were made in the 1980s," he said. "And this is a chance to rebalance, to bring a more stable source of revenue."

Mayor Brian Treece also voted against the proposal. He said it could have undermined public confidence in city government.

"We do have important needs that this tax does not solve, but it is an immediate tax increase with no immediate benefit to the people paying the freight," he said.

Chris Martin with the Columbia Board of Realtors also opposed the proposed property tax rate increase.

He said the board understands the economic needs of the city, but opposed a change in property tax without voters' approval.

"We understand the time sensitiveness that it has to be every even year, so the fact that we are running out of 2018 this discussion does have to happen today," Martin said. "We appreciate the fact that they are having public comment about it, but overall, yes it is well within their rights to raise the ceiling, it just, once again I go back to the fact that there is no public vote on it."

Martin also said increasing property tax rates is not an equitable way for the city to collect more revenue.

"We have a city that has a large rental population due to the universities and things like that, and not everybody is a property owner," he said. "The city is in need of revenue, we would just like for it to find new avenues, more equitable avenues for that."

The city's finance department will continue to use the current 41-cent property tax rate ceiling to calculate the property rate each owner would have to pay.

City council will then hold a public hearing and vote to establish the tax property rate for 2018, at its August 20 meeting.