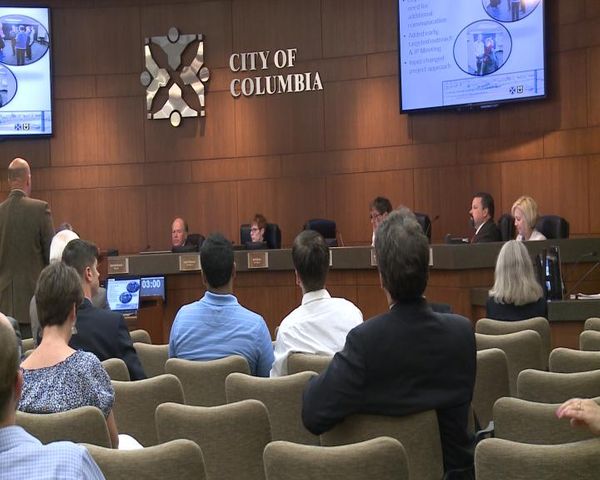 COLUMBIA - The Columbia City Council meets Monday. City leaders will discuss at wide-range of topics at the meeting, which begins at 7 p.m. downtown.

One item on Monday's agenda is the vote on rezoning property on Providence Road and Turner Avenue. The City Council members need to vote on rezoning the area on the northeast corner of Providence Road and Turner Avenue and on the northwest corner of Turner Avenue and Fifth Street. The property currently is classified as District R-2, a Medium Density Multiple-Family Dwelling district. The vote would switch the classification to Planned Unit Development, PUD-52. This vote would secure the development intentions of the ACC OP Development LLC group. While it's listed on the agenda for Monday's meeting, a letter sent in late June requested the vote be tabled. On June 27th, Vice President of Development of American Campus Communities Chuck Carroll submitted a formal request asking the City Council to table to discussion until August. The letter states additional time is needed to coordinate between the developers and the city of Columbia. City leaders approved tabling the ordinance previously at May 19 City Council meeting.

In addition to the zoning items, city council members will also discuss proposed waivers for open containers laws at two Columbia festivals this summer. The South East Craft Beer Festival is set for Saturday, August 23 and organizers hope the city council will waive the open container laws for the event. If the City Council approves the waiver, open containers for festivalgoers would be allowed on Fay Street from Wilkes Blvd. to Smith Street, and Hinkson, between College Ave and Fay Street. You can see the city's open container ordinance here. The supporting documentation states the proposal meets City Code for special events. A similar waiver will be presented for the Ninth Street Summerfest Event, which spans over several months beginning in late July. If the waiver is approved open containers will be permitted from 6:00 pm until 11:00 pm on July 30, September 5, September 19, October 8, October 22 and October 24 for festival activities.

The meeting begins at 7 p.m. at the Council Chamber at 701 E. Broadway. The full agenda can be found here.