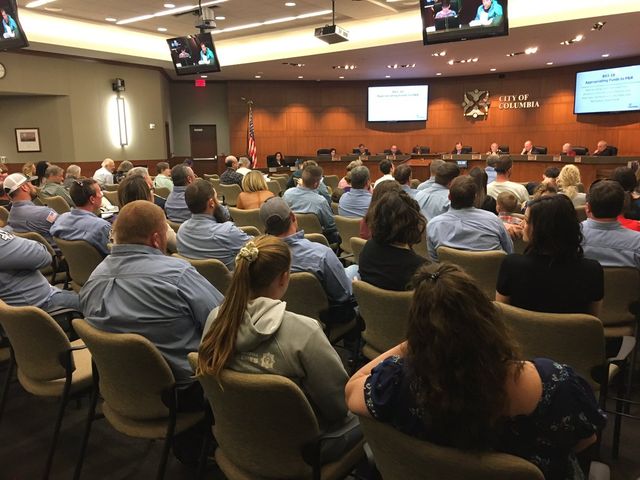 Rick Nolan, who is a lineworker for Columbia, said the raises are needed.

He said the current average rate for journeyman lineworkers is around $31 per hour and Boone Electric Co-Op pays about $10 more per hour than the city.

James Masten, who has worked as a lineworker in Columbia for more than 10 years, said the city's lower wages means they hire less experience staff.

He said he's concerned for lineworkers' safety because they have less experience.

"The toughest part is if something were to go wrong and somebody were to get hurt or killed," Masten said. "You know me living that with the rest of my life or me not making it home."

The raises will have no affect on the 2019 city budget because three empty positions were eliminated from the city.

The city council also agreed to search for a legislative fix to their jurisdiction agreement with Boone County Fire Protection District. The original agreement delays response times because dispatchers are sometimes confused if county or city crews should respond to an emergency.

Columbia City Council will hold public hearings on renovations at Cosmo-Bethel Park and replacing security cameras in parking garages owned by the city.

The improvements at Cosmo-Bethel Park include resurfacing tennis courts, renovating a parking lot and the construction of a new park entry sign.

According to a memo to the council, the lights improve safety during late-night hours.

Mayor Brian Treece took his oath of office at the beginning of Monday night's meeting. The meeting starts his second term as Columbia's Mayor. He defeated former State Representative Chris Kelly on April 2.