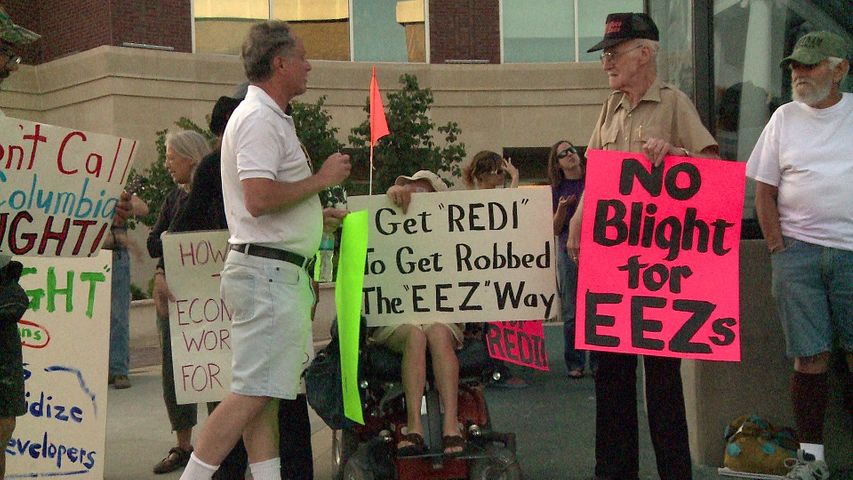 COLUMBIA - Columbia City Council voted unanimously in favor of an ordinance to reestablish the Enhanced Enterprise Zone Advisory Board Monday night. The council voted to established the board along with Resolution 20-12 on Feb. 6, but rescinded the resolution at its last regular meeting May 7.

Despite the unanimous vote, the EEZ board faced rather large opposition. Protesters gathered outside city hall around 5 p.m., and grew to a total of 22 just before the start of the meeting.

Residents all shared similar concerns about the EEZ data which the city is using to promote the ordinance. "There simply has not been the information presented yet to the public," concerned resident Catherine Park said.

"We haven't seen the details, the statistical empirical data that lets us know why there would need to be an Enhanced Enterprise Zone."

Park and other residents also had concerns with the notion that an EEZ would immediately bring businesses and an influx of jobs to the area.

"Just because you offer tax incentives to big businesses doesn't mean they will drop everything and come here," one resident said. "They aren't just going to come hire everyone the second they come here."

Concerned residents also said small businesses and home owners will likely be forced to bear the tax burden since they will not get the same tax incentives as those businesses in the EEZ.

"And to add to that, if they build a plant or steel mill in one area of the EEZ, the property values in that area are just going to plummet," one man said. "Who wants to live next to a steel mill?"

The mayor said in a special meeting for the first reading of the ordinance May 9 that he is open to recommendations from council members for those five spots.

The ordinance says the board's responsibilities will include: