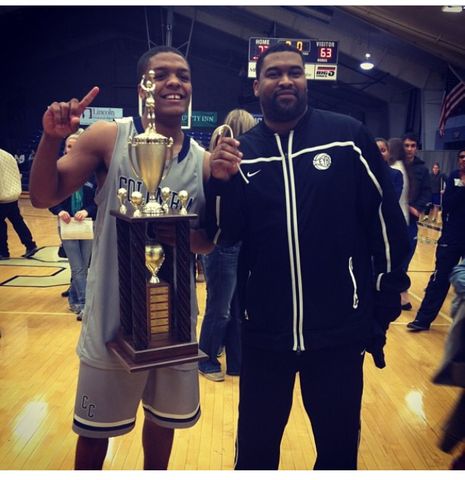 COLUMBIA - Columbia College guard Pep Stanciel has a unique relationship with his stepfather.

"I'm his step father, but I definitely don't look at like that. I'm his father," Pearson said.

Pearson married Stanciel's mother, Toni, when Stanciel was a freshman in high school. Since then, Pearson has gone to nearly every one of Stanciel's games, home and away.

"[I've missed] maybe one or two," Pearson said. "What he doesn't know is I probably enjoy it just as much as he do."

He sits in the same seat every game.

"That is his favorite seat," Stanciel's mother Toni said. "He has to sit there. We get here early to make sure he has that seat."

"Everybody tease me cause I'm talking to the guys," Pearson said.

"I think they need to investigate cause he shouldn't be allowed to do that because he's helping us way too much," Stanciel said.

But that wasn't always his seat. 20 years ago, he sat on the Columbia College bench as the sixth man for the Cougars, also under coach Bob Burchard. This is the first time in Burchard's 27 years as head coach he's coached a father and a son.

"He had the green light," Burchard said. "Bottom line, when Ron came in if he was anywhere close to where he felt like shooting it, we let him."

"Me and his game is the total opposite," Stanciel said. "I'm a driver and he's a dead three point shooter."

So who was the better player?

"I'm going to say this as a parent says things. I love them both for different reasons," Burchard said.

As different as the two are on the court, off the court, they're so similar. They both take humor very seriously.

"Both of them in the room can keep you laughing," Toni Pearson said.

"I would probably have to say me because I have him laughing all day long," Pearson said.

"He'll send me a funny picture of a person with a gap, because I have a gap," Stanciel said.

"He teases me about stuff I probably couldn't say on camera. he is like man, below the belt," Pearson said.

They may not be blood related, but they sure do act like it.