Columbia College graduate speaks on living life to the fullest 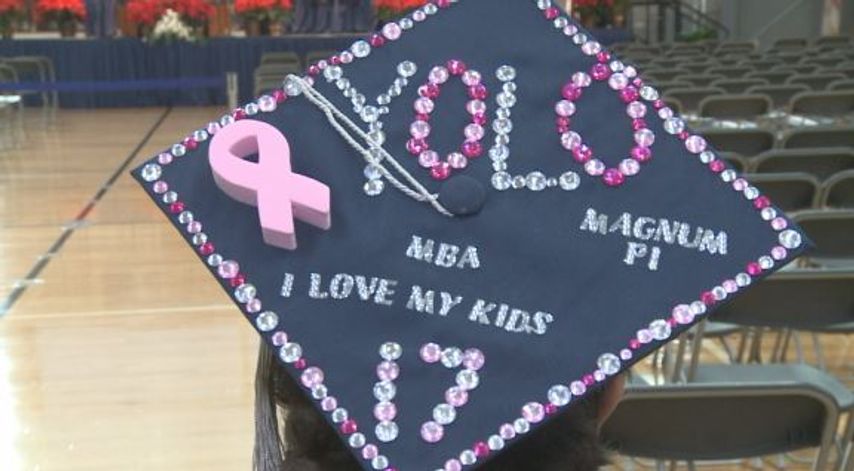 COLUMBIA – Graduation day is long awaited by many and Amy Kiso Bledsoe is no exception.
Bledsoe was one of the first student graduation speakers at Columbia College Saturday.
“I just want everybody to realize no matter what we’re struggling with individually day to day, it doesn’t have to be a complete struggle,” Bledsoe said. “It’s so important to focus on what you can do and obviously here I am, stage IV cancer looking at the end and I’m still going. Very strongly!”
That’s the message she decided to share with 346 of her fellow graduates.
With 16 family members cheering her on, Bledsoe graduated from Columbia College with her masters of Business Administration.
“I’m really thrilled that it’s finally here,” Bledsoe said.
Bledsoe has also earned two other degrees from Northwest Missouri State and Lincoln University. But this degree means more than the others.
“I did not walk in the other two,” Bledsoe said. “The first one, I was a relief house parent for a group home for adults with disabilities and they had tickets to go the circus on graduation day. So, I went to the circus with them instead of graduation.”
Her second graduation didn't go as planned either.
“The second graduation from Lincoln, I had my cap and gown, I was ready to walk but my second child was born a little earlier than I wanted him to be so I was not able to walk for that one,” she said.
But this graduation is also special for another reason. Bledsoe was diagnosed with cancer for the second time in March. She was diagnosed with stage IV terminal breast cancer. Despite her prognosis, Bledsoe continues to live her life to her fullest and be a light for other around her.
“With everything she’s ever done and having the diagnosis of cancer twice, she’s finished this and she’s done it with dignity and grace and she’s always smiling,” Lorie Kiso, Amy’s sister, said.
"None of us ever know when we're going to expire," Bledsoe said. "With my cancer I honestly didn't expect to live this long after I was diagnosed so that's huge. I'm glad everybody is here to celebrate with me," she said.