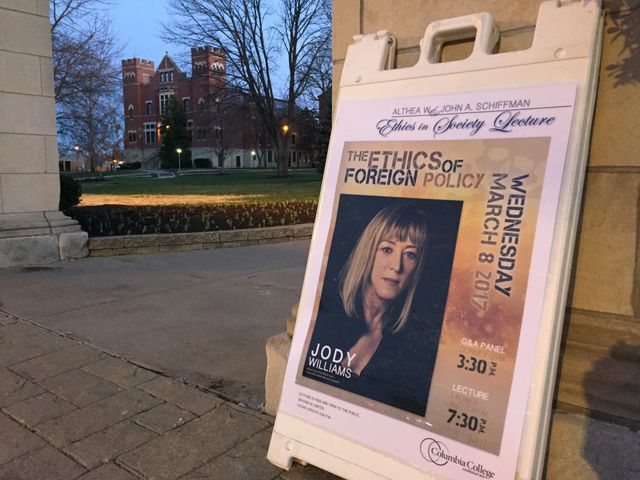 Williams won the prize for her efforts in getting anti-personal landmines. Schiffman Chair Dr. Anthony Alioto said Williams is a great example of how a single person can make a big difference.

“Jody Williams’ life story is a girl from a small Vermont town who actually made a difference by finding a subject, an obvious problem that she could work on and actually led to the banning of anti-personal land mines,” Alioto said.

John Schiffman founded the event in 2000 in hopes the school and the community would engage with ethical issues in contemporary society.

“It is my hope that Columbia College will become a force in carrying forward the message to students that integrity, honesty, fairness and compassion are as important as intellect,” Schiffman previously said.

The lecture continues to honor his name two years after his death and continues to engage students every year.

“People will ask, students will ask, I ask: what can I do as an individual? It seems sometimes that you’re overwhelmed by the forces of society, of international politics and the rest,” Alioto said.

Alioto and the College think Williams will make a great speaker to help students realize the activist strength of even a single person.

“She is a formidable person and we wanted to get across that you don’t have to make enemies. As Ghandi said, ‘you can’t change a man’s mind by cutting of his hand.’ This is the kind of person we’d like to have talk about ethics,” Alioto said.

Williams’ speech will take place in Launer Auditorium at 7:30 and is free to the public.