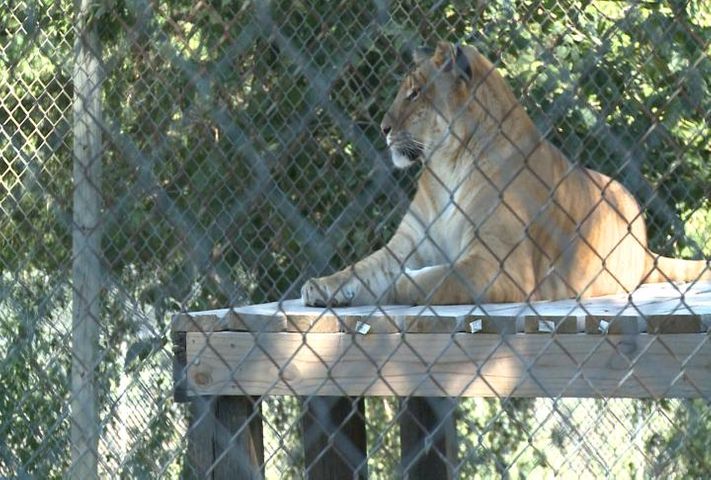 BOONE COUNTY - Deb and Dale Tolentino only open the doors to their farm twice a year, and when they do it's only for a few hours.

The couple owns the D-D Animal Sanctuary, a home and rehabilitation center for exotic and domestic animals. Alongside dozens of volunteers, the couple hosted an open house fundraiser Sunday afternoon. Volunteers said they thought about 200 people stopped by throughout the day. Adults paid $10 and children under 10 cost $5 to see the animals that live at the sanctuary. Funds raised will go towards caring for the animals that live on the property with the Columbia couple.

D-D Farm and Animal Sanctuary is a 501(C)3 organization and is licensed by the MO Conservation Dept. and USDA.

"We found everybody was curious. They all wanted to know. We thought, well, if we open it up for four hours twice a year, people that want to know can come in and see," Deb Torentino said.

That curiosity drove the couple to begin hosting the biannual open house fundraiser. Kids and parents alike marveled at the Azland, the lion, the Liger Feisty, as well as chickens, tortoises, mountain lions and dozens of other animals. Deb Tolentino said for many of the kids, their visits are the first time they've seen a big cat in person.

"Usually they're quite shocked on how big they are because they do have some size, but sometimes they like the little stuff better because it's more their size. The big guys can scare them. Kids get surprised," she said.

The fundraiser helps the couple, who said they said pay many of the farm's expenses out of their own pockets, with maintaining and caring for the animals that live with them.

"Wildlife is valuable. I think that's the most important lesson the kids can learn," Tolentino said. "They need to get interested because without the kids being interested in the wildlife there is no hope for this planet. We have to take care of them. We have to make their environments at least acceptable to them. That's my biggest thing I want anyone to take away from here. "

Monetary donations can be mailed to: D&D Animal Farm Sanctuary and Rescue, 6000 North Creasy Springs Road, Columbia Missouri, 65202
The couple also takes volunteers to help around the farm. They said to call ahead (573-446-0648) to set up a time to volunteer at the property. You must be at least 18 years of age.

The next open house is expected to be held in May 2015.