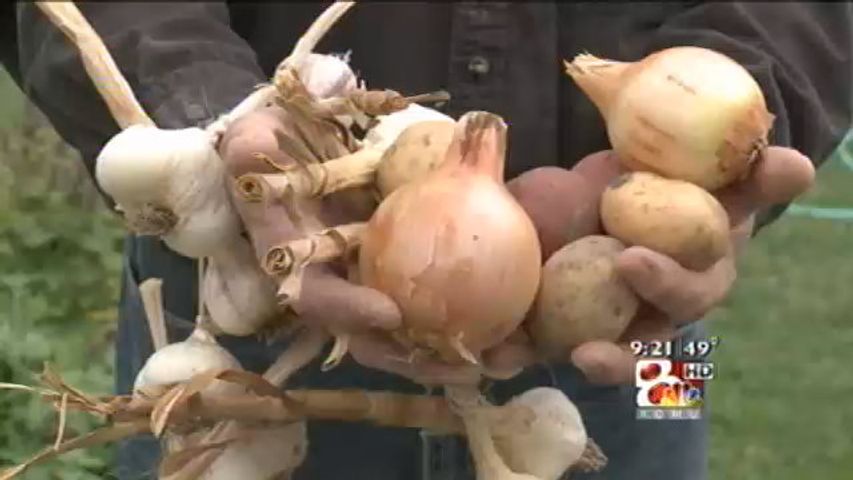 This isn't a grocery list. Rather it's a glimpse into the garden of Roy and Elaine Hartley. The couple uses a 20 by 70 foot area of their front yard to show people the importance of growing their own food.

"It's really important for people to start seeing vegetables growing and understanding the connection between vegetables and the food you put in you're stomach," Roy said.

The Hartley's grow nearly 50 different varieties of fruits, vegetables and herbs. It's also home to rabbits, deer, caterpillars and birds. The diversity helps to reduce pest problems and provide produce year round.

"Some of [the plants] die back down, but the sage probably won't go dormant completely, unless it gets pretty cold," Elaine said. "I've picked sage in December to cook with." She said rosemary, thyme and oregano also grow well in the winter.

"I've got six months worth of onions in the basement hanging up and a years supply of garlic hanging up and I did have 60 pounds of potatoes, but we've eaten half of those already," Roy said with a laugh.

This couple said they accomplished all that and more with just $150. After moving from Portland, OR to Columbia a year ago, the Hartley's decided to start their garden. They did so with seeds instead of full grown plants, except for the blueberries, cherries and rose bushes. Most of the seeds should last until the end of 2014 too, which means fewer annuals to replant.

Even though the Hartley's do shop for fresh fruits and vegetables at the store, every meal incorporates at least two plants from the garden. According to Elaine, the sour cream and cream cheese were the only parts of their potato soup dinner that didn't come from the garden.

But the garden is for more than good eats. From herbs alone, "you can make facial scrubs, vodka, brandy and vinegars," Elaine said. Elaine sells these products along with handmade clothes at the Columbia Farmer's Market on Saturday mornings. The food scraps from the garden are used to make compost and improve the soil.

According to Roy, all it takes to have a successful garden is the upfront effort of making the beds and maintaining them. It doesn't matter how much land is available.

"Totally feasible," he said. "Start small and work your way up. If you have a little space you can spade it up (and) plant a couple tomatoes."