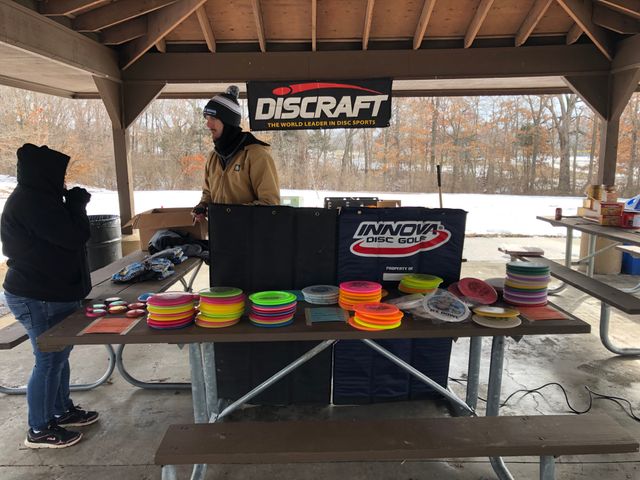 COLUMBIA - Disc golfers from across the Midwest came to Albert-Oakland Park on Saturday for the 33rd annual Ice Bowl Tournament.

The tournament, which attracts professionals and amateurs, originated in Columbia.

Joe Douglass, the Columbia Disc Golf Club president, said the theme of the tournament, "No whimps, no whiners," represents the spirit of the participants that come out to brave the cold every year.

The club aims to build a sense of community around the sport. The club holds the tournament the weekend before the Super Bowl as a way to bring people together.

"There's that weekend between the playoffs and the Super Bowl when there's no football, so who cares what the weather is like. Let's go out and play some disc golf," Douglass said.

The tournament is split into 10 divisions. Two rounds are given to each division, and there are eight holes to each round. More than 100 people came out to fill all the divisions.

Dan Balke, the president of Jefferson City Disc Golf Club, said disc golf is accessible for people of all ages because it is inexpensive, low-impact, and located in many parks.

"It's like ball golf and throwing a frisbee at the same time," Balke said.

All of the proceeds from the Ice Bowl Tournament go toward the Food Bank for Central and Northeast Missouri.