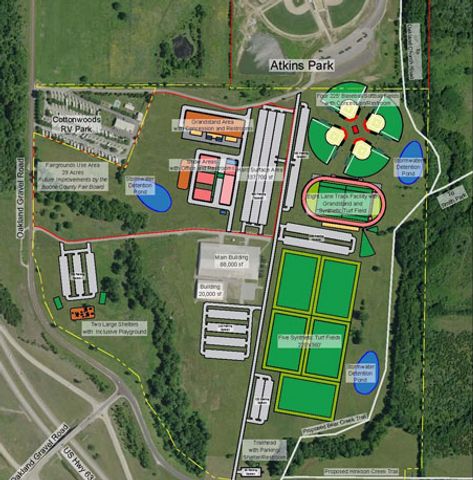 COLUMBIA - Boone County Officials announced their plan on Dec. 5 to transfer ownership of the Boone County Fairgrounds to the City of Columbia.

The City has agreed to convert the grounds into a recreation complex that will benefit families in the county, local sports teams and Columbia's economy.

In 2014, a consultant feasibility study recommended an aquatic center, an indoor field house which opened last year and a baseball/soccer facility like the fairgrounds plan.

Director of Columbia Parks and Recreation, Mike Griggs, said the recreation center will have numerous benefits.

"Columbia will be able to host tournaments that can bring people in from out of town," he said. "In this case, what we are looking at facilities that can be used to benefit everyone that lives in and around Columbia."

Griggs said the new turf fields and ball parks will allow families to save money on tournament fees and create sports tourism even during winter weather.

"We will have five or six synthetic turf fields where, you know, you are going to play regardless of the weather," he said. "You really can bring anywhere between 50 and 60 teams that can come in and they know they are going to play."

One Columbia mother, Grainne Redmond, said she can spend hundreds of dollars on a weekend tournament in Kansas City or St. Louis.

"One weekend, depending on how many nights you stay in a hotel, could cost you a few hundred dollars per tournament," she said. "If our whole family goes, you're looking at $70 per dinner times two, lunch breakfasts, which could end up being $400 just for one weekend."

She said in order to budget, she has to look at the year as a whole and set aside a certain amount of money for the tournament fees.

"So many people have been looking for something local, looking for a good quality facility and looking for it local so we didn't have to travel these distances," Redmond said.

General Manager of the Courtyard by Marriott in Columbia, Eric Lawson, said it's hard to say how the tourism will affect sales, but he looks forward to the new guests.

"It would depend where the teams are coming from, length of stays, and the number of tournaments held," he said. "The addition will for sure have an increase in occupancy and revenue for the hotel market."

The new park would also include two picnic shelters, an inclusive playground for children and adults of all abilities and a 29-acre agricultural park that could become the permanent home of the annual Boone County Fair.

"It will be easy to get to, and a lot of people that wouldn't normally go to the fair would go if it was just down the street," Griggs said.