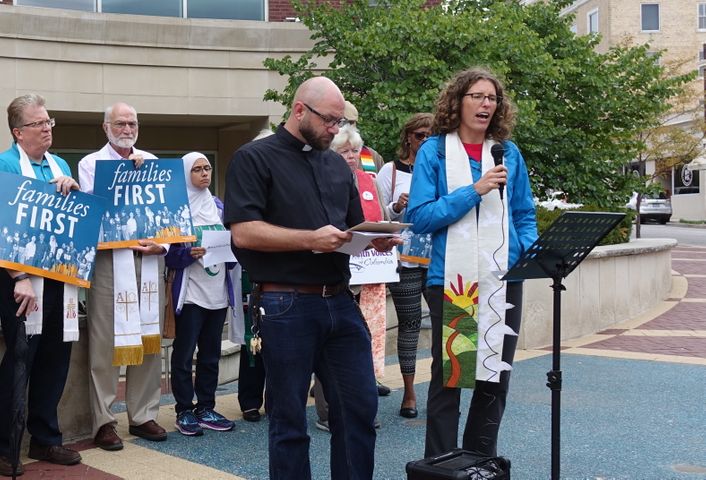 COLUMBIA - Faith Voices of Columbia issued a call-to-action for city officials to be aware of the "moral implications" of the city's budget.

On Monday, Columbia's budget for this fiscal year went into effect. Faith Voices said the budget did not prioritize poverty, community policing and affordable housing within marginalized communities. However, it does applaud raises for city workers and the efforts toward saving parts of the transit budget.

"There have been some great efforts that this city has put forth," said reverend Sarah Klaassen of Rock Bridge Christian Church. "We're looking for an even deeper conversation as we go."

"We are using this opportunity to voice our disappointment that a moral approach to the conversation was not a focus this year," said pastor Brad Bryan of Wilkes Boulevard United Methodist Church.

Faith Voices has been opening up community discussion to find areas that are in most need of budget funds. Bryan said many of these discussions take place in the wards near the Wilkes Boulevard United Methodist Church. The topic of discussion also focuses mainly on disparities among the African-American community, poverty and homelessness.

"We are not necessarily a data collecting organization," Bryan said. "We just talk to people face-to-face about their lives and we can hear that this idea that enough is being done is absolutely not true."

This afternoon, Faith Voices gathered outside city hall to clarify its demands and explain what strategies it will be pursuing to achieve them. Bryan was joined by Klaassen and Fourth Ward Council Member Ian Thomas in the press conference, as well as multiple other representatives of Columbia's religious communities.

"Sometimes we look at financial things as separate from ethics or social equity... that our government has prioritized," Klaassen said. "We want to bring those two together because that's where our heart is."

We reached out to Mayor Brian Treece, who was unavailable for comment. City Manager Mike Matthes did not get back to us by the time of publication. However, Thomas has joined the conversation and supports Faith Voices' message.

"I think everybody should behave in the most morally responsible way possible and that certainly applies to city government," he said. "I very much appreciate Missouri Faith Voices drawing the attention of government leaders to the importance of morality in our decision-making."

Although Thomas has received the group's requests well, he says he cannot speak for other council members or city staff.

"The overwhelming atmosphere and culture and response that we get from the city level is that enough is being done and that all in their power that can be getting done is getting done," Bryan said. "We disagree with that."