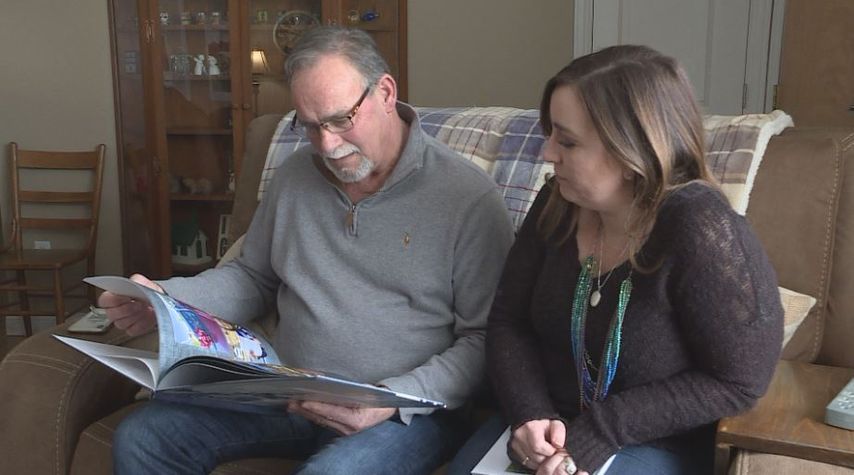 COLUMBIA - The family of a man who died of an opioid overdose is working to help others affected by addiction while honoring his memory.

Scott Haynie was 32 when he died after struggling with an addiction problem for years.

"When I think of him, I think of this fun-loving, smiling kid," his sister, Angelee Haynie Geisler, said. "But that bright-eyed smiley kid kind of started to disappear on us.”

Geisler said she doesn't know what led to Haynie's addiction, but she could point to a few things that might have contributed.

After losing her brother, Geisler said she wanted to help other families who cope with drug addiction. She helped form a chapter in Columbia associated with a national recovery program for people struggling with narcotics and their families.

“I would have given anything to take this addiction from you so you could have lived a normal life,” he said in the eulogy.

Scott Haynie sought treatment for his addiction multiple times and was able to maintain sobriety for stints of his life. He admitted himself into a long-term residential substance abuse program in Neosho from December 2015 to July 2016.

Geisler said her brother left the program early and quickly went back to using.

"I think his addiction really got out of hand in that year and a half, more than we ever knew," she said.

Haynie sought in-patient treatment at the Phoenix Program in Boone County from December 2017 to January 2018. His sister said, after the program, he did well for about nine months.

“We thought he was doing great," Geisler said. "He had an amazing girlfriend and an amazing job and was living on his own and he was the happiest I’ve ever seen him in a very long time.”

Jim Haynie said his son was clean until the day he passed away. The family sent donations to the Don Howard Scholarship Fund, which supports Missouri residents with a minimum of one-year sobriety to further their education.

“I went to see you at the funeral home the other night," Jim Haynie said in his eulogy. "It was the most difficult thing I’ve ever done in my life. I just had know it was really you.”

Geisler said she thought heroin was the drug that killed her brother.

“When we got the toxicology reports back it showed no heroin," she said. "It showed 100 percent straight fentanyl and about three times the lethal limit.”

Fentanyl is a synthetic opioid that's about 80 to 100 times stronger than morphine, according to the United States Drug Enforcement Administration.

Haynie's family is now working to destigmatize addiction, reinforcing that the disease does not discriminate.

“We're not going to be ashamed about it," Geisler said. "We wanted to be able to help other people, so hopefully nobody else would have to go through the pain we’ve gone through."

Geisler did some research and found a national program that hadn't existed in Columbia that could help families that were just like them.

“I want everyone to know that there are other people out there, you’re not alone, and don’t be afraid to talk about it.”

A 12-step recovery meeting for family members of people addicted to narcotics is now held every Wednesday at 6:30 p.m. at the Missouri United Methodist Church, 224 S 9th St, Columbia, MO 65201.

“It doesn’t just affect the person struggling with addiction. It affects the whole family," Geisler said. "I can speak for myself, I felt so scared and lonely and I didn’t know what to to about it.”

Jim Haynie said he hopes sharing what happened to his son will save someone else's life.

“Hopefully, this will help people talk about it more," he said. "Be open about it, and I think that’s going to help everyone.”

Geisler said she's is in the process of bringing more resources for substance abuse prevention to Columbia by starting a Community Anti-Drug Coalitions of America.

She is also working on putting together a 5K walk and run in September to bring awareness to National Recovery Month. She said proceeds will go toward supporting people in recovery for drug and alcohol addiction.

Columbia residents continue to drop off their recycling at centers as bins overflow
COLUMBIA — It's been almost one month since Columbia residents were told their recycling would no longer be picked up... More >>
22 hours ago Wednesday, August 05 2020 Aug 5, 2020 Wednesday, August 05, 2020 6:36:00 PM CDT August 05, 2020 in News
Share:
Email
Facebook
Twitter
Next Page