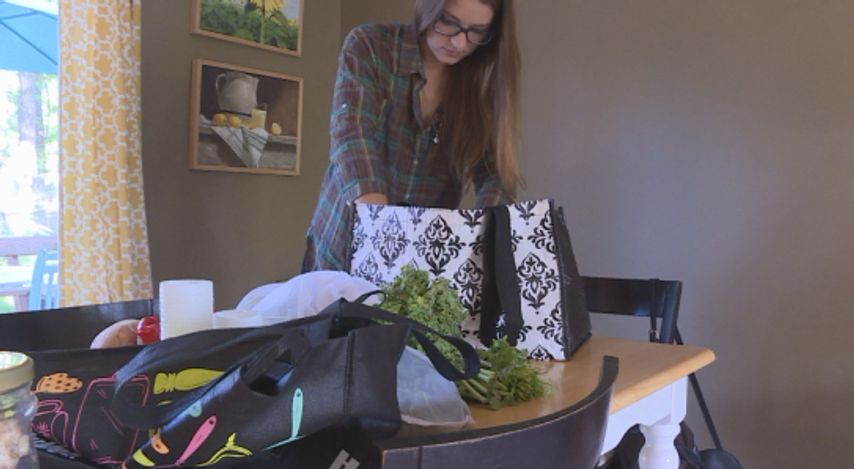 COLUMBIA - Avoiding plastic to go containers, avoiding groceries wrapped in plastic, making their own toothpaste and cleaning supplies and growing their own spices are just a few of the steps a Columbia family takes to dramatically reduce waste.

Lauren Wimmer said, "First we started recycling, but then I did a lot of research on that and found out that's not actually as great as it seems. Plastics usually only get two or three lives, papers only usually get two, aluminum and glass can be recycled forever which is good, but it's plastics that really got to my heart. So, plastics is one of the first things I started to eliminate."

She said it's difficult, especially with a young son, Hendrix.

"It's been really hard. I would say just denying him common things for children is one of the hardest parts, and is actually not something I always deny him because he is only four," Wimmer said.

Although Wimmer teaches her son the importance of understanding where trash goes and how it affects the environment, he still gets to make his own decisions.

"I'm a frequent coffee drinker and I always bring my own cup. So I asked him if he wanted to bring his own cup and have them make him chocolate milk rather than buy it in a box. He decided he wanted to get the boxed milk, so I explained to him that that would create trash but he still chose it, which to me is fine, he's his own human being and doesn't have to follow what I do," Wimmer said.

Hendrix does love to help.

"I like to take the cans and put them in the recycling to help the earth," he said.

His father, Austin Kolb, said there was one aspect of working towards a waste-free life that wasn't as difficult as he expected.

"The easiest thing about becoming more waste-free was giving up paper towels, that was something that was unexpected," Kolb said.

Both Kolb and Wimmer face different obstacles with their new lifestyle.

Wimmer said, "I travel a lot for work and that gets really hard to make it a day without making trash because airports don't have a lot of things that aren't wrapped in plastic."

For Kolb, it's more about daily routines.

"The hardest thing about going waste free for me has been just the convenience aspect, like ordering in food, or quickly picking something up at the gas station," he said.

The couple brings glass containers to restaurants so they can take their food home with them.