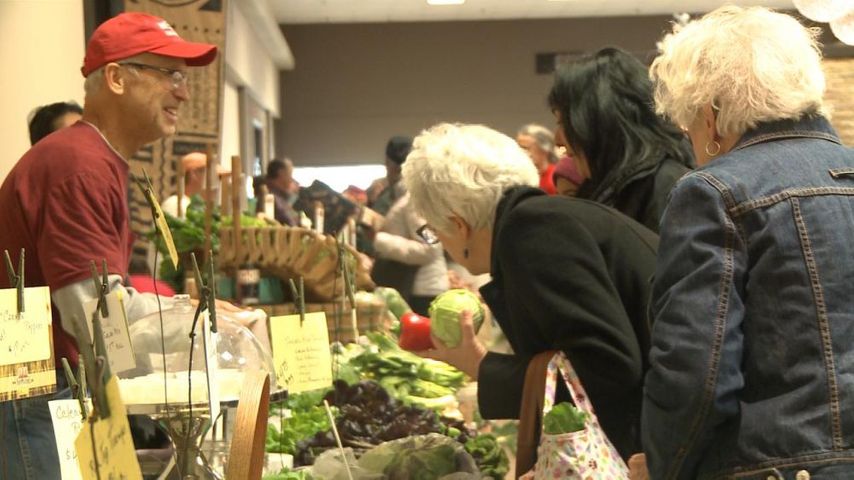 COLUMBIA- Vendors and Columbia residents packed inside the Parkade Center on Saturday for the first winter market.

This is the Columbia Farmers Market's 5th year offering a winter market in the Parkade Center, however this year the market is trying something new and will be having a Thanksgiving market on Tuesday, November 24.

Market manager Corrina Smith said the Thanksgiving market has been successful throughout the country and it will offer consumers a chance to buy fresh goods.

One vendor Mary Manulik who sells gluten-free baked goods will not be at the Thanksgiving market due to a large number of private orders.

Although she has an uptick in orders during the holidays, Manulik said she doesn't change her prices because it wouldn't be fair.

Despite the additional holiday market, many vendors and consumers were already planning ahead on Saturday.

"We just made our list last night for our Thanksgiving and next weekend's big event and hoping to get most of that here," said consumer Carmen Randal.

Randal has been visiting the Columbia Farmers Market regularly for the last 15 years.

"It makes it more as a social event for me because I not only fill my pantry but I also get to check in and touch base with friends I've met and built relationships with over the last 15 years or so," Randal said.

While the community gathering aspect of the market remains, Smith said the atmosphere is more relaxed in the winter months.

35 vendors filled the center on Saturday selling goods from produce to baked goods.

Smith said there is a slight decrease in the amount of vendors in the winter months because not all producers are able to grow throughout the season.

Smith said some vendors start selling their goods at the winter market because the smaller scale and fees makes it easier for them to get their feet wet.

Saturday's market was the first for Trudy Ferguson. Ferguson just started selling jellies and jams at the Lincoln Farmers Market earlier in the year.

"Lincoln's farmers market, winter months, only gets together twice a month," Ferguson said. "Columbia market gets together every weekend and that's where I would like to be-- where the most people are."

The winter market started off funded through a Specialty Crops Grant and operated out of a local church. In the last six years, the indoor market has grown and can now stand on its own through funding of vendor fees.

Smith said the market hopes in the future to transition to a larger location.