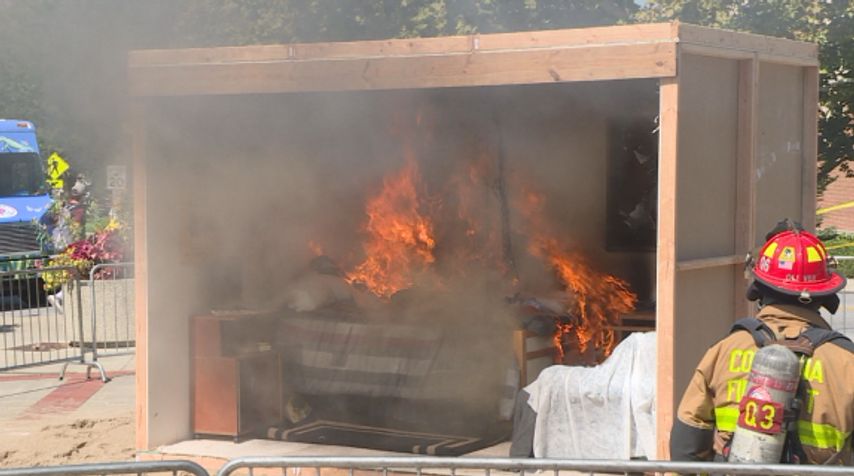 John Cruz is a junior at MU, studying mechanical engineering. Although he now lives off-campus, he said he lived in a dorm, freshman year.

"I think most people are prepared for fires as in they're ready to evacuate as soon as possible," he said.

However, Cruz also said he believes others are not prepared to deal with a fire emergency. For that reason, he said the simulated room burn was important to raise awareness among students.

"I think it would be very important for them to understand how quickly a fire spreads because in their demo it took only a few minutes to go from a small flame to a whole room in flames," Cruz said. "In those minute or two it would be a matter of life and death."

The National Fire Protection Association (NFPA) reported between 2012 and 2016, fire departments across the nation "responded to an estimated annual average of 4,100 structure fires in dormitories, fraternities, sororities, and barracks." Those incidents caused annual averages of 33 civilian injuries and $15 million in direct property damage, NFPA said.

Some of those incidents have also resulted in deaths.

"From 2000-present, 92 fatal fires have been documented that occurred on a college campus, in Greek housing or in off-campus housing within 3-miles of the campus – claiming a total of 132 victims," according to The Center for Campus Fire Safety.

"We never really know exactly how many people would be in any structure, and certainly when you got dorm room with a lot of people in them, you find more furnishings, more things that can catch on fire," he said.

"Sometimes students are away for the first time, or haven't been on their own for very long," he said. "Little things like leaving candles unattended can be very dangerous, unattended cooking."

"When you buy a space heater that it's in good working condition, that the cords aren't frayed, that it's got tip over protection, so if it does fall over it automatically turns off," he said. "Most importantly, keep anything that's combustible at least three feet away from it."

As for Cruz, he has a list of precautions to prevent a fire in his house.

"Keep watch when you are preparing food, so you don't burn anything, and make sure outlets and extension cords are clear of fabrics and clothes or bedding, so that those won't be possible spark catches," he said.