Columbia gets into the holiday spirit by giving back 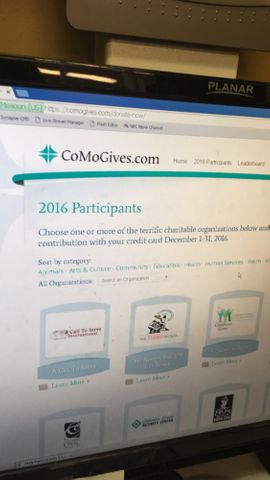 COLUMBIA - The fourth annual CoMoGives Campaign has some lofty goals for the 2016 holiday season, hoping to raise more than $400,000 by December 31.

The online campaign, founded in 2013 by the Community Foundation of Central Missouri, allows donors to give to 92 nonprofit organizations in Columbia throughout the month of December.

John Baker, executive director of the Community Foundation, said the campaign provides a structure for organizations that are too small to develop their own.

"The campaign acts like the spine of fish. Everyone is a rib bone and part of that same campaign structure," Baker said.

Other benefits of the campaign include being able to attract first time donors and the opportunity to win challenge grants through the Community Foundation, according to Baker.

"If an organization reaches certain metrics we provide these [grants]," Baker said.

There are seven metrics this year the organizations will compete for, Baker said.

First Chance for Children, a repeat participator in CoMoGives, held an “Ugly Christmas Sweater” celebration to kick off the campaign on December 1.

"It's truly an opportunity for us to really work together and lift up our community," said First Chance Executive Director Christina Gilbert.

The number of organizations and amount of money raised has increased year after year.

Baker said he expects the campaign to continue throughout the years but wants to make it a shorter campaign in the future.

Baker said United Way is the biggest campaign in town, but CoMoGives is not in competition with it.

"Some of our organizations are animals, some are veterans, some are arts. these are all kinds of things that aren't currently funded by the United Way campaign," Baker said.

You can find out more information on the organizations involved and how to donate at www.comogives.com.