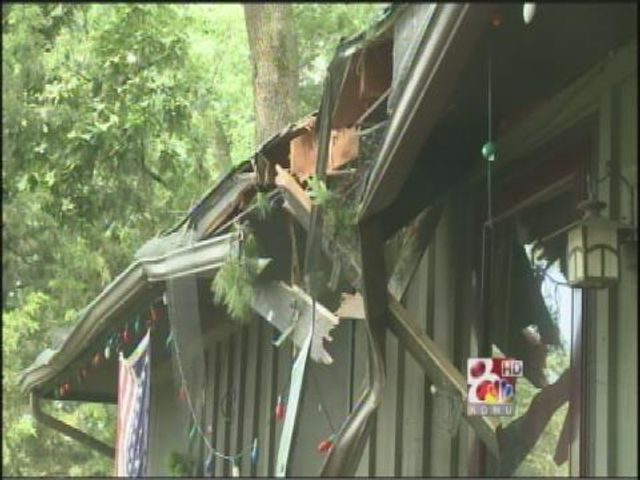 Mike Heimos tells KOMU News that the storm's violent winds about 3:30 a.m. Saturday made him think it was a tornado approaching. "The wind was blowing and I heard a whistling sound like the air was being sucked out of the house and 'boom.'  The next thing I know, a tree came crashing through the front door," said Heimos, Columbia resident.  The same storm brought 60 and 70 mph wind gusts, hail and one tornado to the central Missouri region.  But, the National Weather Service says an actual tornado did not develop near Columbia as storms weren't severe enough for a tornado warning to be issued for the area.

When tree contractors cleaned up the large branches and organic debris that fell on Heimos's home Saturday, they noticed his 60-foot pine tree in the front yard snapped upwards instead of sideways.

"It just seems to be plucked straight up off the tree, and that's an odd situation...I've not seen that with any type of storm except for a tornado," said Timothy Lancaster, Everest Tree Services contractor.  Tree contractors we talked to said the storm created a rare updraft in order to break the large tree in mid-air and then carry it a few feet over landing on Heimos's roof.

Clean-up crews we talked to said they found fallen trees in other parts of the city.  But, the pine tree that fell on Heimos's home that was caused by the wind was the worst they've seen in a while.  Because of Saturday's violent weather, some local people are surprised but relieved a tornado didn't develop in Columbia.