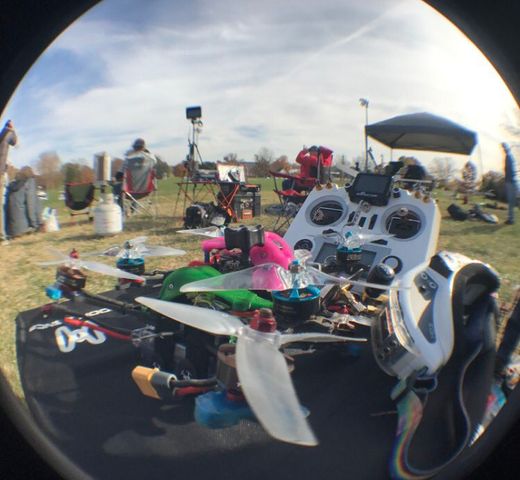 Over $300 was collected from entry fees that will be donated to Boonville and Randolph County Toys for Tots.

"The biggest thing is that we’re trying to get the word out about these flying robots that we have," chapter organizer and pilot of Heart of America FPV, Shawn Ames said.

"We think it’s a great way to get teenagers and college students to you know put their minds into something and learn about aeronautics, and learn about engineering and really what it takes to build these crafts," Ames said.

Drone racers wear goggles to go behind the wheel of their drone and steer using joysticks. What started as a hobby for one pilot is now an obsession.

"I went out to a race and one of the guys had an extra set of goggles that he let me borrow and I was just hooked from there," said Josh Waldron of Kansas City. "She can attest to that," he finished, joking and pointing towards his wife.'

Similar to other warm weather sports drone racing is dormant during winter months. Entering what is known as the 'build season', pilots hope to make tweaks to their drones that will improve lap times.

"Theres a lot involved here, every quad that's out on the course today was built by somebody, these aren't things you just buy," Ames said.

For more information on Heart of America FPV and winning times for Columbia races click here.