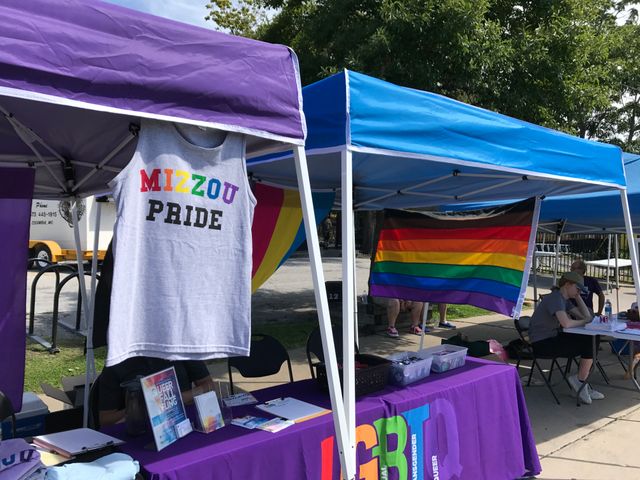 The organization held a festival at Rose Music Hall that included live performances, over 80 vendors, a variety of food and activities for people of all ages.

MidMo PrideFest has annually celebrated the lesbian, gay, bisexual, transgender, queer, questioning and ally communities in Missouri since 2003. Jackie Marcink, president of MidMo PrideFest, said the group started during a small BBQ in the park and has grown tremendously since.

“PrideFest is pretty powerful for me. My family is LGBTQ and you know, this is just a place where our friends are, and our friends are our family, and we’re all here together and we’re celebrating," Marcink said.

According to their website, PrideFest is important to Columbia because "it allows us to not only celebrate our identities and the things that make us unique, but it also gives the community an opportunity to show their support to their LGBTQ neighbors, friends, employees, and customers.”

This was the third year the organization held the free festival at Rose Music Hall. Marcink said, "Rose is just kind of the perfect place. There’s not a whole lot of car traffic here. We’ve got this big beautiful stage, this big yard, and we’re able to have all these vendors."

There was a number of performers at the festival including The Quorus, The Laughing Hearts, and Tiger Rider. There were also Muse Pole Dancers and a Drag Show to finish off the night.

Former Miss Mid-Missouri Entertainer of the Year and the organization’s 10th Pride Queen, D’Manda Respect, was a part of the festival’s Pride Royalty and Drag Show. Jessi Mitchell, who performs as Arkham Skye, was also a part of the royalty group.

The festival was family-friendly, welcoming both young children and teenagers. There was a kid’s area with activities, a bounce house, Super Heroes and Disney princesses and this year there was also a teen lounge.

Seileach Corleigh, the president of Columbia's National Organization for Women, was at the festival.

“This festival is really important to the community, especially in the day and age that we’re living in," Marcink said. "We currently have legislatures that are actively passing bills in our state and nation wide against the LGBTQ community and particularly our transgender community and I think it’s really important that we show up, that we say that we’re here and we’re not going away. We exist, we’re human and we deserve the same rights and respect as everybody else in the community."