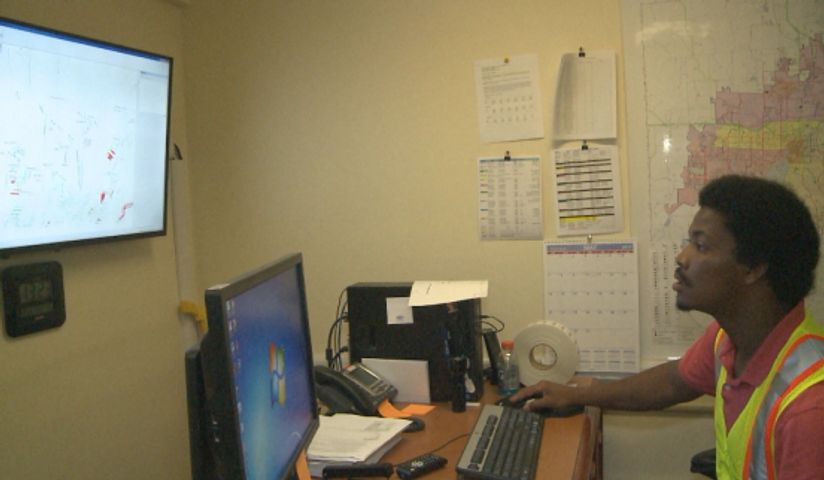 COLUMBIA – Four summer interns work with the city of Columbia to rate the conditions of roads and determine which streets need repairs within city limits.

The interns use a computer system known as Geographic Information Systems (GIS) to rate city roads on a three-year cycle. Crews visit multiple roads requiring inspection on weekdays, and assign ratings based on the need or urgency for street repair.

“Essentially, they have us just go around and rate all the roads on how much cracking is going on,” said Chad Maxey, city of Columbia engineering intern. “It gives you kind of an inside look behind the scenes at what your tax dollars pay for.”

Maxey said the rankings and decisions tied with each road vary based on location, surface and use for each street. He said he is optimistic Columbia has maintained roads adequately citywide with the three-year rating cycle.

Seth Nelson, a city of Columbia engineering specialist, said street supervisors could approve maintenance to take place the following summer for some of the rated roads. Manor Drive, Bouchelle Avenue and Olympic Boulevard are some of the recently rated roads Nelson thinks could fall under such criteria for 2018.

Keegan Nash, another engineering intern for the city, estimates he and fellow interns have analyzed and rated more than 100 roads since mid-May.

“It’s nice to be able to get the real world experience of the job and working with the city of Columbia,” Nash said. “We’re going out to serve different parts of Columbia, and it’s pretty cool to reach out to larger parts of the community.”

Marcus Jones, a street division intern who worked with Maxey and Nash in the field last summer, said the experience aligns with his studies in civil engineering at MU.

“I can kind of get a jump start on what I want to do once I graduate college, and I feel like it actually has a pretty big impact,” Jones said. “You don’t realize how much planning and work go into maintaining the city’s roads over the course of five or 10 years.”

Mike Heimos, the storm water educator for the city of Columbia, said the city’s summer internship program has grown substantially over the last 10 years in an effort to include more training beyond the engineering department.

Heimos said more than 100 people are participating in the program city wide this year, including 22 interns who filled all positions offered by the city’s public works department offered heading into the summer.

“They’re helping us work on projects that we would generally need more staff to do, and they’re spread out to help us be more efficient,” Heimos said. “We really try to have a variety of opportunities for young men and women to work in the community.”

Heimos said most interns will work until they resume school in mid-August, but he thinks they can contribute a lot to Columbia before then.

“We’re trying to educate the next generation of workforce and I think it’s very important for us, as the city of Columbia, to lead as the example,” Heimos said. “Everybody has to start somewhere, and I’m glad they can start with the city of Columbia.”