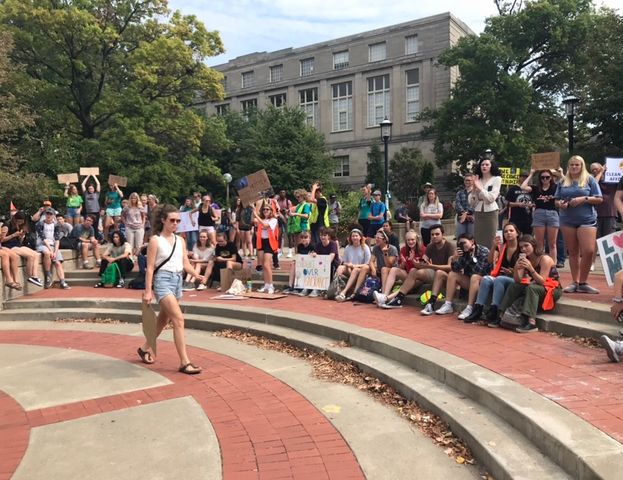 COLUMBIA - A climate strike is taking place on the MU campus Friday at noon.

It's part of a global series of demonstrations over climate change. More than 150 countries around the world are seeing similar strikes. The Global Climate Strike is supporting youth strikers and the demand to end the age of fossil fuels.

The co-hosts of the Columbia event were Sunrise Movement and Climate Leaders at Mizzou.

Heather Belser is the Hub Coordinator for Sunrise Movement in Columbia and helped organize the strike.

Rory Butler is the outreach director for Climate leaders at MU and helped organize the days events with Belser. He said this global strike is pulling students from classes who demand action.

Butler said they are asking that the university divest their endowment with fossil fuel corporations.

"I really am hoping people learn a bit more about how serious of a problem climate change is and I hope people are driven toward action," Butler said.

UM System Spokesman Christian Basi said "we are very proud that we have the ability for individuals to express their opinion on various matters."

When asked if responding to the fossil fuels request was going to happen Basi said "We certainly looked at that. while we dont feel there is a persuasive arguement that doing so would actually create a difference throughout the world."

Basi said they have cut 21% of MU's energy use and a 51% decrease in green house gas emissions.

Lindsey Oberly is student at Hickman High School. She left third block to join the demonstration in Speakers Circle.

"This affects our future with the decisions adults are making right now," she said. And she wasn't alone. "theres a group of 15 to 20 students from Hickman here."

It wasn't just these younger kids at the days events.

James Owen Executive Director at Renew Missouri. "Theres a lot of energy and a lot of excitement" he said, "but where should that energy be going."

"We're seeing progress but were also seeing things at a global level getting worse." He said, "I think this is really going to be a factor on people future so they should be concerned about it."

Live updates from strikes happening around the world are being posted to the Global Climate Strike website.