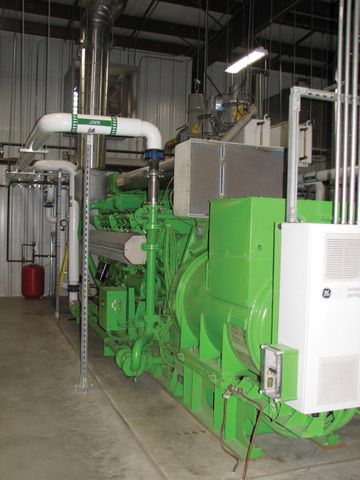 COLUMBIA- People touch it every day, but it's of no value - or is it? It's garbage, and it consists of everyday items consumers use and then throw away. In Columbia, trash is treated at the Columbia Landfill Gas Energy Plant. A Utility Services Specialist, Connie Kacprowicz said the great thing about the landfill is that it uses the trash for energy.

"Trash that you take to your curb every week is actually going to the landfill being properly disposed of, but then it is also returning to your house in the form of electricity," Kacprowicz said.

At the landfill plant, decomposing waste causes gas and that's turned into energy which becomes electricity for the city. The Sustainability Manager for Columbia, Barbara Buffaloe said the city hoped to turn that methane gas into energy.

"In landfills, as your organics breakdown, so like your yard waste, as that breaks down it creates methane gas," Buffaloe said. "And methane gas is a much more toxic greenhouse gas emission than any other greenhouse gas."

This picture shows what happens at the bioreactor cell; also known as Columbia's Bioenergy Plant, located at the landfill.

As waste decomposes it produces greenhouse gas. The landfill gas is then captured to produce a valuable commodity that is used each day, electricity. But Kacprowicz said Columbia is limited on the amount of electricity the landfill generates. That's because there's only 3 generators to collect that energy.

"The production levels went up enough that in 2013 we installed an extra generator," Kacprowicz said. "We still have room for one more generator, but we will have to wait until gas levels get high enough to support that addition."

This past year, the Columbia Landfill Gas Energy Plant installed a third generator.

And while going from fossil-fuel energy to renewable energy has benefits... the city is limited by how much --- and how fast --- it can accomplish that. That's because renewables can only cost 3 percent more than energy the city is buying now.

"The cost of electricity has gone up," Kacprowicz said. "It's hard to tell what's going to happen for the future, but there's a lot of different things impacting the cost of the fuel source and how much it costs to produce that electricity."

Kacprowicz said the goal for the city is to make sure costs do not rise.

"Anything that we can do now to make sure that we're saving for the future as well as encouraging energy efficiency will really help us as far as cost goes in the future," Kacprowicz said.

With four generators planned for the future, electric production could grow even more.