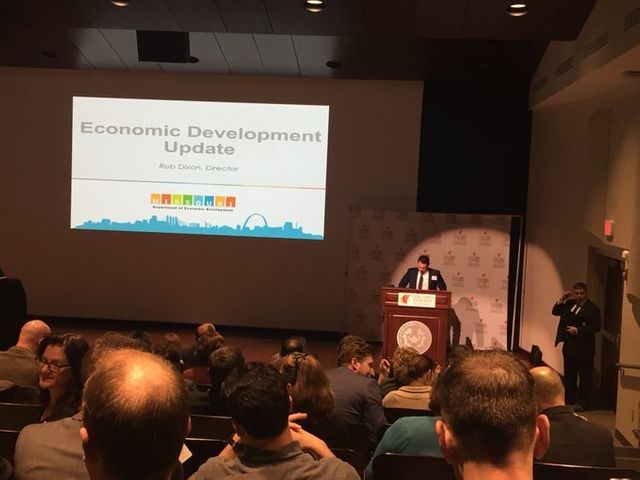 COLUMBIA - The 2018 Economic Outlook Conference kicked off at Columbia College with a laugh and speakers discussing how Mid-Missouri is advancing its future workforce.

“The sales tax revenue problem with online shopping is getting so great that it's forecasted by the end of 2019, there will be just two retailers left in Missouri, Amazon.com and Bass Pro Shops," Columbia College President Scott Dalrymple said in an opening joke.

Panelists discussed economic growth in the city, county and state, as well as education.

“The governor’s top priority is more jobs and higher pay,” Dixon said. Missouri is at a historic 17-year low unemployment rate at 3.5 percent."

He said Boone County is leading the way for job creation and growth, with an unemployment rate of 2.2 percent.

"Second in the state, and largest metro in the state that has unemployment that low," he said. "You are truly state leaders in that regard.”

Dixon said the state has added 30,000 jobs to the economy over the last year or so.

Missouri moved up nine spaces in CNBC’s Top States for Business. Missouri has a $309.4 billion economy and it’s growing at a rate of 1.5 percent.

Missouri has the seventh most diverse economy in the country. Dixon said that means Missouri felt the 2008 recession less and bounced back more quickly and even stronger.

The quest to bring the hyperloop to mid-Missouri was part of the discussion.

“It’s much closer than we might have thought,” Dixon said. “This is how railroads were developed."

Dixon said he is looking forward to the Hyperloop, just don't expect him to be in line for a ticket right away.

“I won’t be the first one to ride it but it will be fun to ride it," he said.

Dixon said he is focusing on developing Missouri’s talent, growing Missouri’s businesses and more. Dixon said 64% of machinery jobs could be replaced by existing technology, he wants to make sure Missouri keeps developing its talent to prevent that.

The second part of Dalrymple's opening joke centered on education.

"It's expected that by the 2024-2025 school year, the entire Columbia Public School system will be left with two resources, Peter Stiepleman and an iPad,” he said.

A panel featured, Stiepleman, the superintendent of Columbia Public Schools, and Caitlin Codella, the senior director of policy and programs from the US Chamber of Commerce Foundation.

Stiepleman said CPS needs teachers who will put down roots in Columbia.

“We train them and then they leave,” he said.

Stiepleman wants to see more externships and opportunities to connect students in the real world. Codella said she has seen this work across the country, but local businesses need to provide the internships.

Stiepleman questioned society's focus on sending all students to college.

He said every superintendent that came before had the same mantra: "4-year college, 4-year college, that the destination for every kid graduating had to be college."

Stiepleman said he would instead like people to start thinking about middle-skilled jobs, certificates and listening to what students want instead of just saying, "4-year college."