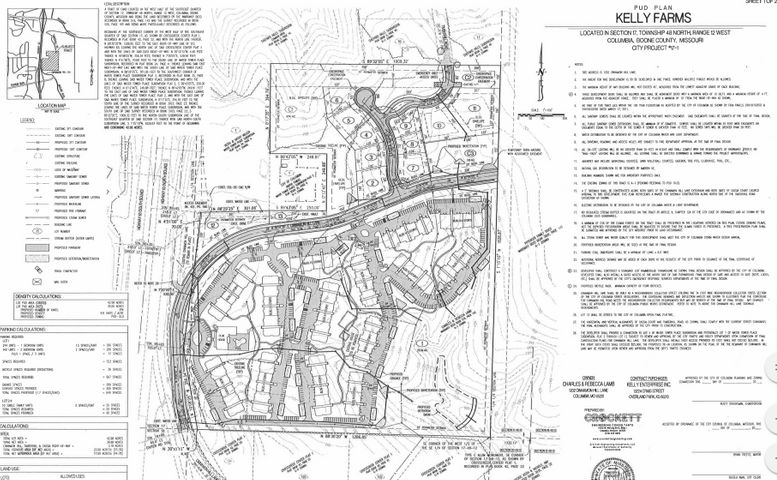 COLUMBIA - A new apartment complex and several single-family homes could be in Columbia's future. Kelly Farms would be located north of the Stadium Boulevard and U.S. 63 interchange, behind the Holiday Inn Express and extend to Timberhill Road, a residential road.

The developmenters plan to make a realignment and extension of Cinnamon Hill Lane as a neighborhood collector to eastern edge of the property, and provide for the extension of Timberhill Road.

Many Timberhill Road residents have expressed concern that the road will bring traffic to the neighborhood and be a safety hazard on the narrow road.

Columbia Development Services Manager, Patrick Zenner, said the Planning and Zoning Commission recommended a gate be installed between the existing neighborhood and and the proposed single-family lots to restrict traffic from using Timberhill Road.

Katie Kane and Anne Minor are Timberhill Road home owners and say they are unimpressed by the new development for a number of reasons.

"I'm hoping that the recommendation will go through from PNC that the road would be emergency access only but we can't ever be sure of that. We're concerned about property values, the amount of construction and my biggest concern is the urban forest," Kane said.

"I am very concerned with the tree preservation," said Minor. "I think they are taking a beautiful piece of land and making it an unattractive location. I don't know if they need that many large apartment buildings in Columbia."

Both Kane and Minor agree that they aren't against development on the land they would just like to see less density in the area.

Unlike the other apartment complexes popping up, Zenner said the new housing would not target students.

"This site has had similar requests for this type of use in the past which were unsuccessful. The proposed apartment development is significantly different from the prior requests in that it is not "student-centric," Zenner said.

Columbia City Council is meeting Tuesday night to have the first reading about the development.