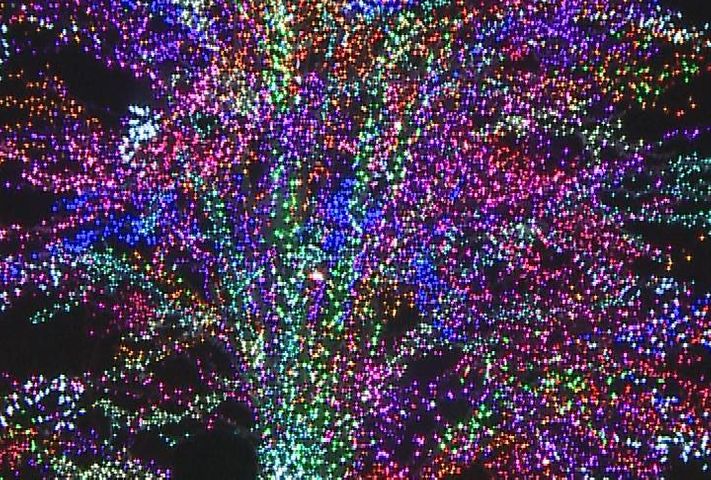 COLUMBIA - The Magic Tree in Cherry Hill celebrated its 20th lighting on Thursday with a ribbon cutting.

Ambassadors from the Columbia Chamber of Commerce were present to officiate. The event featured carolers, food trucks, horse-drawn carriage rides and a visit from Santa himself who did the final honors of lighting the tree.

The Magic Tree is a crab apple tree in Columbia lit by a man known as "Will Treelighter" every holiday season. The first lighting of the Magic Tree was in 1995. Each year the light display becomes more elaborate, with mini-holiday lights covering every branch.

"I think it symbolizes how, with a little bit of work, we can bring the invisible light that is in everything into manifestation, by seeking what is beautiful about things. I think that there is beauty everywhere if we have the eyes to see it," Treelighter said.

Treelighter said the tree started as a personal project and quickly became a favorite in the community.

"20 years ago, when I first put some lights out on a tree all the way to the ends of the branches just to see what it would look like, and people to seemed to like it. So I said well, I think I can do better than that, so the next year I tried to top myself, and I've been doing that ever since," he said.

Crowds of people gathered in the square at Cherry Hill to celebrate the milestone. Treelighter said he wants the tree to send a message of hope to anyone who sees it.

"I have a magic formula, and that is, see beauty, share your good, and that results in having joy. And it really is magical and so simple," Treelighter said.

The Magic Tree is lit every evening from 5 p.m. to 11 p.m. from Thanksgiving Eve to January 6 at the Village of Cherry Hill in south Columbia.

To find out more, visit Magic-Tree.org.