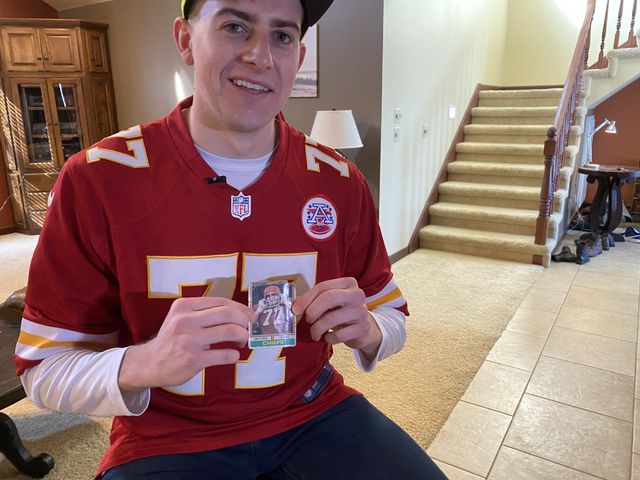 COLUMBIA - Even though he grew up in Kentucky, Braden Tyrer is as big a Chiefs fan as they come. After all, it runs in his blood.

"My grandfather was Jim Tyrer, number 77 for the Chiefs," Braden said. "He began with the Dallas Texans and continued on with them for over 12 seasons."

This time 50 years ago, Jim Tyrer was preparing to take the field against the Minnesota Vikings in Super Bowl IV. Jim played left tackle in that game.

He played for the Chiefs until 1973, before playing one season with the Redskins in 1974.

"He's a three time AFL Champion, Super Bowl Champion, he's in the Chiefs Hall of Fame and he was on the AFL All-Time Team," Braden said.

While Braden wasn't alive to watch his grandpa play, his dad has passed on many memories.

"In Super Bowl One when they were playing against the Packers, my dad always tells me he was that little kid playing outside," Braden said.

Braden's dad, Brad, is no longer that little kid. But, still remembers his father as larger than life.

"This year is the 40th anniversary of when my dad… he actually shot my mom and committed suicide," Tyrer said.

In hindsight his family believes that action most likely resulted from CTE, a brain condition brought on by concussions.

Decades later, Tyrer's relatives choose to remember him as the stand-out athlete he was.

"Most of our family is very proud of him, proud of his accolades and proud of the Chiefs," Braden said. "My grandfather very much paid for his time and players are still making that sacrifice today."

And for Braden, his grandfather still lives on through his own Chiefs pride.

"Chiefs if you can hear me right now, battle hard, let's go down there and get this done," Tyrer said. "We've got a lot of fans all across the state waiting to see this happen so, let's go Chiefs!"