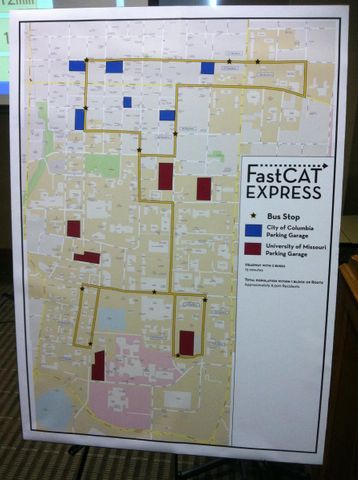 McDavid said the current transit system is operating at a $1.5 million deficit and significant changes need to be made to maximize efficiency while also serving its largest base of customers--students.

The proposed FastCAT system would:

The proposed prices for rides are:

McDavid set the one-year revenue goal at $300,000 and said he believes the new system will reduce congestion downtown and reduce car traffic.

"We want cars to be luxuries," McDavid said, "not necessities."

The mayor mentioned that the initial conversation regarding changes to city transit came about after discussions with the transit task force, community stakeholders and owners of Brookside Apartments about land use and transportation. If the new proposal goes through, Brookside has agreed to cancel its bus service, since FastCAT will serve its residents instead.

Although the FastCAT proposal was put forth on Thursday, city council members and other city officials will have to move quickly to implement the system before students return for school in the fall.