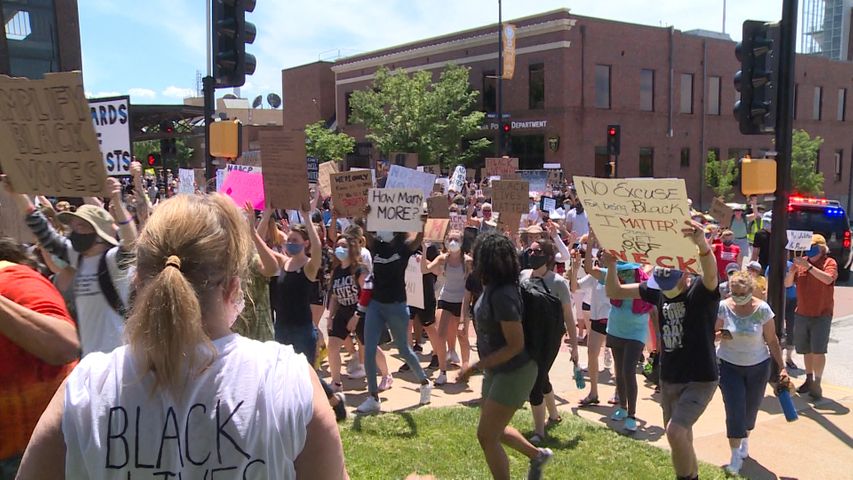 COLUMBIA - Columbia residents marched Saturday in the wake of the killing of George Floyd in Minneapolis.

The president of the Columbia NAACP chapter, Mary Ratliff, organized the rally and invited community leaders to speak alongside her to the crowd. Those leaders included Mayor Brian Treece and the first ward’s newly elected councilwoman, Pat Fowler. Columbia Police Chief Geoff Jones was in attendance, but did not address the crowd.

One of the speakers, local attorney David Tyson Smith, said incidents like the one in Minneapolis are a real possibility in Columbia. Smith and Ratliff both underscored they will be taking legal steps forward to mitigate that risk.

“Let’s not pretend that what happened in Minnesota is some aberration and it’s different here,” Smith said. “No, the systemic racism – the problems that are in Minnesota – are here. Those problems are here.”

Mayor Treece said he instructed the city manager, city attorney and the police chief to review the city’s use of force policies last Wednesday. He did not say whether any changes have been made to those policies.

Ratliff said she is happy that the officers in the Minneapolis incident were arrested, but stressed the need for a conviction.

“Nobody’s convicted,” Ratliff said. “And if the people go out and then go home, they will be acquitted. So we need to let everyone know that we are here to stay so that we can get some justice.”

Ratliff and others made many references to the unfolding civil rights movement being dependent upon young people. Saturday’s rally also included a voter registration drive, focused on getting young people signed up to vote in upcoming elections.

20-year-old Kelsey Blanton, an MU student, volunteered at the rally and has been a leading activist in the community this past week.

The rally closed with all the attendees kneeling for a moment of silence that lasted eight minutes and 46 seconds in remembrance of George Floyd.